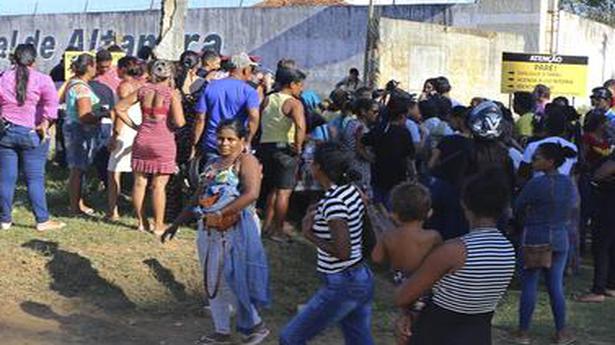 At least 57 prisoners were killed by other inmates during clashes between organized crime groups in the Altamira prison in northern Brazil Monday with 16 of the victims being decapitated, according to prison officials.

Para state prison authorities a fight erupted around 7 a.m., between the Rio de Janeiro-based Comando Vermelho and a local criminal group known as Comando Classe A.

State prisons chief Jarbas Vasconcelos said the fire had spread rapidly, with inmates held in old container units that had been adapted for the prison while another building is under construction.

The fire prevented police forces from entering the building for several hours, he told a news conference.

“It was a targeted attack. The aim was to show that it was a settling of accounts between the two groups, not a protest or rebellion against the prison system,” Vasconcelos said.

Authorities have not found any firearms following the riot, only makeshift knives.

Prison authorities said 46 inmates will be transferred to other prisons, 10 of which will go to stricter federal facilities.

President Jair Bolsonaro was elected on the promise of curbing widespread violence in Brazil, including in the country’s often overcrowded, out-of-control prisons.

obtained a July 2019 report from the National Justice Council that it says was filed by a local judge in charge of the facility, showing that the prison had 343 detainees for a maximum capacity of 163.

The judge who filed the report described the overall state of the prison in the city of Altamira as “terrible.”

In many of Brazil’s prisons, badly outnumbered guards struggle to retain power over an ever-growing population of inmates who are able to run criminal activities from behind bars.

The killings echoed those of 55 inmates who died in a series of riots in May in several prisons in the neighboring state of Amazonas.

In early 2017, more than 120 inmates died in prisons across several northern states when rival gangs clashed over control of drug-trafficking routes in the region. The violence lasted several weeks, spreading to various states.

Para state authorities spent the afternoon in Altamira, drafting a security plan to avoid possible retaliations in the region. Police forces from the nearby municipality of Santerem were sent as reinforcement in the coming weeks.

Prison authorities said they had not received any prior intelligence reports of an upcoming attack.

The prison is run directly by the state, not a third-party private operator as in the Manaus prisons where the riots took place in May.

Emperor Akihito began his abdication rituals at a Shinto shrine on Tuesday morning as Japan embraces the end of his reign with reminiscence and hope for a new era. Television images showed Akihito in a traditional robe entering the main Shrine of Kashikodokoro to report his retirement to the gods. The shine is where the […]

A report reveals that L’Arche founder Jean Vanier, a respected Canadian religious figure whose charity work helped improve conditions for the disabled in multiple countries, sexually abused at least six women. Vanier died last year at age 90. According to the report seen by the AP on Saturday, the women’s descriptions provide evidence enough to […]

“We are pleased to announce that Dr Vivek Lall will assume the position of Chief Executive at General Atomics Global Corporation, effective immediately,” GA said in a statement emailed to PTI on Sunday. Source: thehindu.com Related