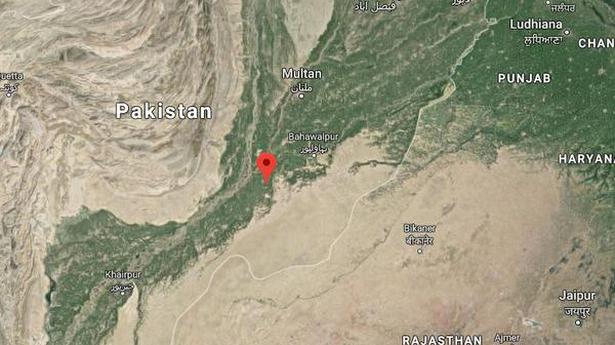 A massive fire broke out on a moving train in Pakistan’s eastern Punjab province on Thursday after two gas cylinders exploded while some passengers were cooking breakfast, killing at least 73 people, mostly Islamic preachers travelling to attend a religious congregation.

The train, Tezgam Express, was on its way to Lahore from Karachi when the fire broke out early morning, gutting three bogies which had over 200 passengers, including women and children, at Liaquatpur near Rahim Yar Khan, some 400 kms from Lahore, authorities said.

District Emergency Officer RYK Baqir Hussain has confirmed that 73 passengers lost their lives in the fire.

Most deaths occurred from people jumping off the train, the authorities said, adding that the toll could rise further as more than 40 passengers have suffered severe burn injuries.

Railway Minister Sheikh Rashid Ahmad said that most of the victims belonged to the Tableeghi Jamaat (Islamic preachers) who were going to Lahore to attend a major annual congregation at Raiwind.

Conflicting claims on reason of blast

The Railways Minister said two gas stoves carried by some passengers blew up when they were preparing breakfast on the speeding train in violation of rules.

“Some of the passengers started making breakfast on small gas cylinders they brought with them when they exploded and the fire engulfed the three coaches of the train,” he said.

The Tableeghi Jamaat office-bearers, however, dismissed the Railway Minister’s claim, saying the explosion took place because of “short circuit“.

“Some injured passengers said that they had told the train officials late on Wednesday night about the short circuit smell but no attention was paid and on Thursday morning explosion took place,” the Jamaat said.

Prime Minister Imran Khan expressed his grief over the incident and directed authorities to provide the best medical treatment to the injured.

The authorities said they were still trying to identify the victims.

Some 10 fire brigade units extinguished the fire after a struggle of several hours. Rescue officials and army helicopters shifted the injured to the hospitals. The condition of most of the injured is stated to be critical.

Liquat Pur Hospital Medical Superintendent Nadeem Zia said most of the bodies brought to the hospital were beyond recognition. He said the dead will be identified through DNA tests.

Eyewitnesses said that they saw several people jumping off the moving train after it caught fire.

“I was travelling along with my mother, a sister and a brother when our bogie caught fire after a sudden explosion at around 6 am. Everyone was crying and looking for saving one’s life. I asked my family members to jump off the train before the fire reached us. My brother and I managed to jump off the train, but my mother and sister couldn’t,” injured Iftikhar Ahmed told reporters at Liaqatpur Hospital.

According to a railways official, the train stopped some two kilometers after it caught the fire.

Prime Minister Imran Khan has ordered an inquiry into the tragedy. The Railway Minister has admitted his administration’s failure for not checking the cylinders the passengers brought with them.

“It was our fault. And we will investigate it,” he said and announced Rs. 1.5 million compensation for each of the deceased and Rs. 500,000 for injured.