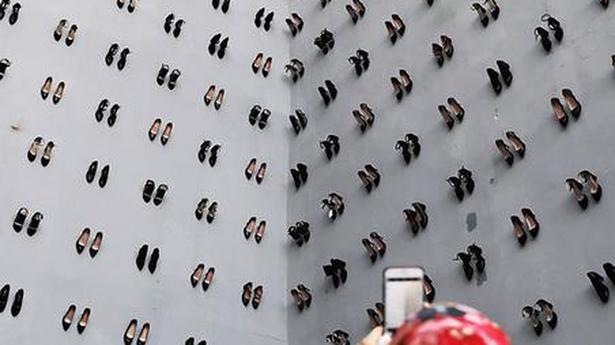 Turkish artist Vahit Tuna has mounted 440 pairs of high heels on the facade of a building on a busy Istanbul street, to symbolise the number of women murdered in domestic or sexual violence in Turkey in 2018.

“We are standing in a street now and maybe people are faced with a work of art for the first time, an open and bleeding wound for the very first time. I believe this has an impact,” said Mr. Tuna.

“I think this (installation) creates awareness and is something that influences people and makes them think,” he added.

In Turkey, there is a tradition of placing the shoes of someone who passed away outside an entrance. The artwork covers an area of 260 sq.m..

“Frankly, I do not feel safe on the streets and this view is really awful. There are 440 pairs of shoes here and it means that many lives have been lost in 2018. This is very upsetting,” said Turkish banker Serap Kilic.

Another banker, Hilal Koseoglu, said: “As long as everybody remains silent, violence against women will increase and this violence is not just about murdering women but also suppressing and silencing them.”

Around 440 women were killed in 2018 in Turkey, according to a report published by Kadin Cinayetlerini Durduracagiz Platformu (We Will Stop Femicide Platform) which keeps records on murders. The platform reported that 49 women were killed by men in the month of August 2019 alone.

At least 19 children were wounded when a primary school was hit by shelling in Myanmar’s Rakhine state, a lawmaker and a military spokesman said on Thursday. Clashes between government troops and ethnic insurgents have intensified in Rakhine, from where tens of thousands of people have been displaced since clashes began in December 2018, bringing […]

The Taliban said on Sunday it will not hold direct talks with the Afghan government and rejected a statement from a senior Minister about plans to hold such a meeting in the next two weeks, a senior Taliban official said. State Minister for Peace Affairs Abdul Salam Rahimi said on Saturday it was hoped that […]