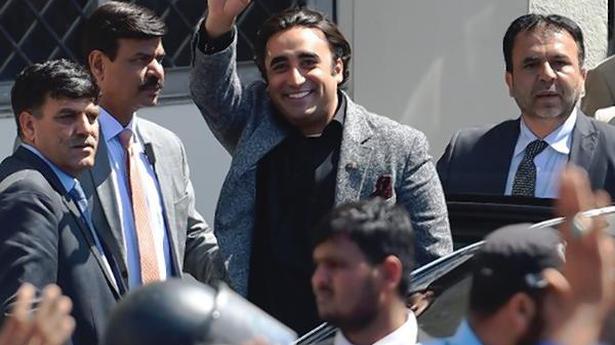 It was Mr. Bhutto-Zardari’s initiative to remove misunderstanding with Mr. Sharif, according to senior journalist Hamid Mir. “It was Bilawal who called Nawaz ‘Modi ka yaar’ when the PML-N was in power,” Mr. Mir said. Though the Opposition parties extended full support to the Pakistan Tehreek-e-Insaf (PTI) government of Prime Minister Imran Khan during the recent tensions with India, the Opposition feels Mr. Khan never treated them well and did not even bother to attend a briefing on national security.

“Both Nawaz and Bilawal definitely discussed some politics. Nawaz asked Bilawal to establish a strong working relationship with his brother Shehbaz Sharif, but the main focus of this meeting was on the health of Nawaz,” said Mr. Mir. He added that Mr. Bhutto-Zardari requested Mr. Sharif to go to some hospital, but the former Prime Minister rejected the advice. “No more humiliation. I will try my luck in the Supreme Court and, if granted bail, will take care of my health myself. but I will not beg this government for treatment.”

PPP Senator Mustafa Nawaz Khokhar, who was also present at the meeting, said Mr. Sharif was in high spirits despite his ailment. “It doesn’t look like Mian sahib is looking for any sort of deal [with the government]. He seemed quite determined to stay in jail and not look for a way out. He also vowed to continue his struggle for democracy and civilian supremacy,” said the Senator.

Parliamentary Secretary on Foreign Affairs and PTI leader Andleeb Abbas, however, played down the meeting. “Both [parties] have the same past; they have both come to power multiple times in Pakistan and each time, their rule has resulted in economic devastation. There are figures to prove this.” She added that cases against these two parties were closed down earlier and their leaders escaped to Dubai and Jeddah. The cases against Asif Ali Zardari and his son Bilawal are from the last government’s tenure but because the National Accountability Bureau (NAB) is taking action against them, there is this hullabaloo, she said.

“The NAB is an independent institution. The PML-N and the PPP didn’t rectify the NAB law when they were in power. We are trying to change these laws, but the changes that we propose are not being accepted by them and there is a deadlock.” Ms. Abbas said the Charter of Democracy, signed by the PPP and the PML-N, “is actually a ‘charter of corruption’… They will now protest on accountability and the NAB. They are afraid that their properties and money will be confiscated. They want to put pressure, derail Parliament so that there is no accountability. They are joining hands to save their own skin, because for the first time no deal is available to them. It’s a natural alliance: they share history, they share a common past and they know they will share a common future as well.”

There have been rumours about some sort of a ‘deal’ that would allow Mr. Sharif to leave the country, but the PML-N denied it. “This rumour was started to malign the PML-N. We believe that this government will collapse under the weight of its own policies. Why should we look for a deal with a government that is anti-people and may not last for long?” said Senator Musadik Malik.

Asked why Mr. Bhutto-Zardari’s meeting with Mr. Sharif is being dubbed by the ruling party as some sort of political conspiracy, Senator Malik said this was expected of them. “The PTI is politicising the Bilawal-Nawaz meeting because it doesn’t appreciate the concept of decency. If you remember, Nawaz Sharif suspended his campaign and visited Imran Khan when he fell and hurt his back during the 2013 election campaign. Was this an act of kindness or a political conspiracy? We understand that it may be too much to ask of PTI to understand basic civility.”

Mr. Sharif’s daughter Maryam thanked Mr. Bhutto-Zardari on Twitter for his “thoughtfulness & kind gesture”. In response to her tweet, Mr. Bhutto-Zardari sent prayers for her father’s health and said, “We are all people first & politicians second.”

India is one of the highest taxing nations in the world: Trump

India is one of the highest taxing nations in the world, U.S. President Donald Trump has alleged as he again slammed the country for imposing 100% tariffs on American products, including the iconic Harley-Davidson motorcycles. Such a high tariff is not fair, Mr. Trump said on Tuesday during National Republican Congressional Committee Annual Spring Dinner […]

15 people killed in coal mine blast in China

At least fifteen people were killed and nine others injured in a coal mine gas explosion in north China’s Shanxi Province, local authorities said on Tuesday. The incident happened on Monday when 35 miners were working underground at the coal mine in Pingyao County when the blast happened, the Shanxi Administration of Coal Mine Safety […]