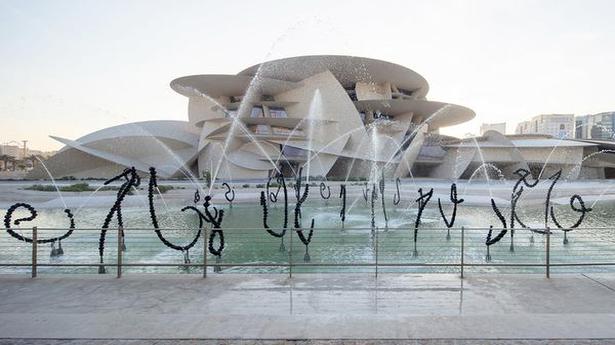 After nearly a decade of planning and construction, the National Museum of Qatar (NMoQ) situated in Doha’s corniche, which tells the story of Qatar and its people from earliest times to today, was inaugurated on Wednesday.

The journey is narrated through eight art films by Doha Film Institute and noted filmmakers, including Mira Nair, multimedia display, accompanied by exhibits that includes archaeological and heritage objects, jewellery, manuscripts and other documents. Braille and tactile display have also been provided for the exhibits.

The NMoQ, which was inaugurated by the Amir, Sheikh Tamim bin Hamad Al Thani, will be thrown open to visitors on Thursday.

The NMoQ is organised in three chapters — Beginnings, Life in Qatar and the Modern History of Qatar — presented in 11 interlinked galleries. Passing through the winding 1.5 km walkway that showcases galleries, visitors get to learn more about the formation of the Qatar peninsula and its natural habitat, the heritage of life in Al Barr (the desert) and on the coast, the political development of modern Qatar, the discovery of oil, and Qatar’s multifaceted relationships today with the larger world.

“A future must grow out of an understood and integrated past. As we move forward we are focussing strongly on culture in diverse forms. We are delving into Arab heritage while also exploring the arts as they are evolving today, both within Qatar and far beyond,” said Sheikha Al Mayassa bint Hamad bin Khalifa Al Thani, Chairperson of Qatar Museums

Sheikha Amna bint Abdulaziz bin Jassim Al Thani, director, NMoQ, said, “The Qatar museums and the National Museums’ team wanted to create a living experience for the people — a museum with a heart.” The team organised meetings to take inputs from Qataris on the history and materials they had to offer.

The centrepiece of the 52,000-square-meter NMoQ is the restored historic palace of Sheikh Abdullah bin Jassim Al Thani, son of the founder of modern Qatar. A building that was once the home of the Royal Family and the seat of government.

The museum is designed like a desert rose, which evokes the culture and climate of Qatar. “To imagine a desert rose as a basis for design was a very advanced idea. To construct a building with curved disks, intersections, and cantilevered angleswe had to meet enormous technical challenges,” said Jean Nouvel, the architect.

Filmmaker Mira Nair said that she was asked to choose a chapter of nation’s history and to make a film.

“I chose pearl diving, which was the economy before oil was discovered in this region. I wrote the film with Annmarie Jacir, a Palestinian director. We called in Nafas — which means breath in Arabic. We shot the film for six weeks and all of them are real people,” she told The Hindu.

(The author is in Doha on the invitation of the NMoQ)

French climber Alain Robert scaled a skyscraper in Hong Kong to put up a banner urging for peace amid protests in the city. The protests started in April against plans for an extradition bill that would have allowed criminal suspects to be handed over to China. The banner unfurled showed two shaking hands as well […]

Google has refused to pull out a controversial government app from Saudi Arabia which lets men track and control women who travel, saying it does not violate its Play Store policies. According to a report in the Business Insider on Sunday, the tech giant told the office of California Democrat Representative Jackie Speier, who had […]