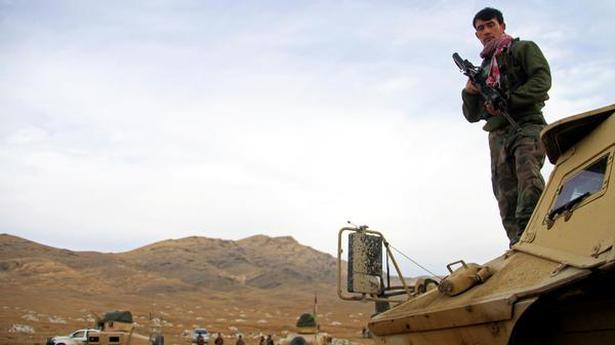 At least 34 people were killed on Sunday in two separate suicide bombings in Afghanistan that targeted a military base and a provincial chief, officials said.

There were no immediate claims of responsibility for the attacks, which took place as Afghan government representatives and the Taliban hold face-to-face talks in Qatar for the first time to end the country’s decades-long war.

In eastern Ghazni province, 31 soldiers were killed and 24 others wounded when the attacker drove a military humvee full of explosives onto an army commando base before detonating the car bomb, according to an official in Afghanistan’s National Security Council, who spoke anonymously because he was not permitted to speak directly to the media.

Afghanistan’s Defense Ministry released a statement claiming 10 soldiers were killed and nine wounded. The ministry also offered a different account of what happened than the official at the National Security Council, saying the vehicle exploded near the army base after security forces opened fire on the car. It was not immediately clear why there was a discrepancy.

The soldiers stationed at the base were responsible for conducting night raids, providing support to the army and police forces under siege, and taking part in large-scale operations against the Taliban and Islamic State group in eastern and southern provinces of Afghanistan.

The base is located in a desert region, about three miles (five kilometers) outside the city of Ghazni. Parts of the base and a nearby police building were partially destroyed by the powerful explosion. Windows were also blown out in buildings of the city near to where the bombing occurred.

In southern Afghanistan, another suicide car bomber targeted the convoy of a provincial council chief in Zubal, killing at least three people and wounding 21 others, including children, according to provincial spokesman Gul Islam Sial.

The provincial council chief, Attajan Haqbayat, survived the attack on Sunday with minor injuries, though one of his bodyguards was among those killed, said provincial police spokesman Hikmatullah Kochai.

There has been a sharp rise in violence this year and a surge of attacks by the Taliban against Afghanistan’s beleaguered security forces since the start of peace talks in September. There have also been deadly attacks this month claimed by Islamic State militants in Afghanistan, including a horrific attack on Kabul University that killed 22 people, most of them students.

The U.S., meanwhile, plans to withdraw an estimated 2,500 troops before the middle of January, leaving about 2,000 soldiers in Afghanistan as part of America’s longest war. Afghan officials, however, have expressed concerns that a rapid reduction in American troops could strengthen the negotiating hand of the Taliban.

The United States has been pressing in recent weeks for a reduction in violence, while the Afghan government has been demanding a cease-fire. The Taliban have refused, saying a cease-fire will be part of negotiations, though the group have held to their promise not to attack U.S. and NATO troops.

A dozen people have been killed in a plane crash in the Colombian plains province of Meta, a police source said on Saturday. The civil aviation agency confirmed in a statement that there were no survivors of the crash, which occurred after the DC-3 aircraft made a distress call at 10.40 a.m. local time, but […]

Democratic presidential candidate Joe Biden said Thursday that President Donald Trump has “tossed a stick of dynamite into a tinderbox” with the targeted killing of Iran’s top general in an airstrike at Baghdad’s international airport. The former vice president joined other Democratic White House hopefuls in criticizing Mr. Trump’s order, saying it could leave the […]

Hurricane Dorian, one of the most powerful Atlantic hurricanes on record, weakened slightly early on Tuesday as it remained stalled over Grand Bahama Island, the Miami-based National Hurricane Center (NHC) said. Dorian has been pounding the Bahamas for days, killing at least five people in the Abaco Islands in the northern Bahamas and inundating homes […]