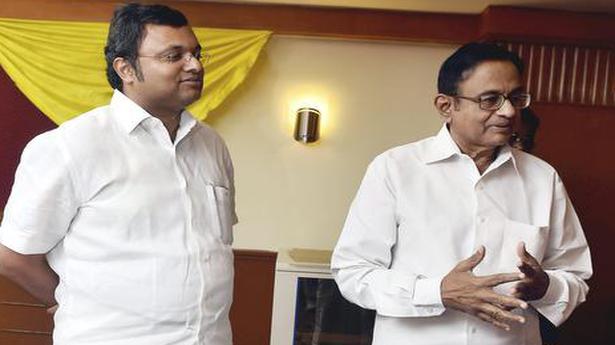 A Delhi court on Friday extended till May 6 the interim protection from arrest granted to former Union minister P. Chidambaram and his son Karti Chidambaram in the Aircel-Maxis case. The Enforcement Directorate (ED) meanwhile told the Court that Mr. Karti was not cooperating in the case and evaded questions on certain emails retrieved from his computer hard disks.

Special Judge O.P. Saini extended the interim relief to Chidambarams and deferred the matter after the ED sought adjournment of four weeks as the response to Letters Rogatory (LR) from Singapore is awaited.

“It is submitted by senior advocate/Special Public Prosecutor (SPP) for ED that Solicitor General/SPP is not available today and the matter may be adjourned. Reluctantly allowed. No further adjournment would be granted. Accordingly, put up the matter for consideration of cognisance on May 6,” the judge said.

The prayer for adjournment was strongly opposed by senior advocates Kapil Sibal and Abhishek Manu Singhvi, appearing for both the accused, on the ground that the prosecution is repeatedly seeking adjournments without any justifiable reason.

During the hearing, the ED submitted an affidavit in the Court and informed that it has sent a team headed by a special director of Directorate of Enforcement to Singapore to ensure that the relevant material evidence is obtained as quickly as possible in pursuance of LR issued by this Court.

A strong prima facie case is made out to investigate money laundered in foreign countries by both the accused, it said, adding that this Court has issued LRs to the U.K. for Mr. Chidambaram and for Mr. Karti to Singapore.

The agency also told the Court that Karti was examined on March 5,6,7 and 12 and was shown emails which were retrieved from the hard disks seized by the ED during the course of searches on his premises and his associates S. Bhaskaran and Ravi Visvanathan along with statements of his various associates.

“The applicant Karti Chidambaram chose not to reply the questions based on emails shown to him, raised questions and submitted stereotype responses. Thus, he is not cooperating in the investigation…The accused has deliberately and wilfully refused to answer even those questions which can only be within his knowledge and which are germane to the investigation,” the ED said.

Substantial evidence is available for custodial interrogation of Chidambarams at this stage, it said. The ED added, however, that for a proper and more effective custodial interrogation and utilisation of statutory period of remand, it is desirable that questioning takes place after receipt of material evidence in pursuance of LR or letters of request to a foreign court for some judicial assistance.

“The insistence of the applicants accused to conclude the hearing of anticipatory bail prima facie reveals their intention of depriving of this court the benefit of the material which may come in pursuance to the LR,” the affidavit said.

The ED also told the Court that Karti during the course of interrogation under Prevention of Money Laundering Act on March 6 was asked to provide details of certain specific transactions.

“He stated that at least three months time is required to provide the desired information. The information is not submitted by him so far. It is submitted that considering the nature and facts of the case, every evidence is relevant for both the accused,” the affidavit said.

On March 25, Mr. Chidambaram had accused the CBI of harassing him by repeatedly seeking dates to advance arguments on his anticipatory bail plea in the Aircel-Maxis case. The case relates to alleged irregularities in grant of Foreign Investment Promotion Board (FIPB) approval in the Aircel-Maxis deal. The duo approached the Court seeking anticipatory bail, claiming that they were afraid of arrest in both the cases being probed by the ED and the CBI. Their protection from arrest has been extended from time to time.

Mr. Chidambaram and Mr. Karti were named in the charge-sheet filed by the CBI in the case on July 19 last year. The CBI is probing how Chidambaram, when Finance Minister in 2006, granted FIPB approval to a foreign firm, when only the Cabinet Committee on Economic Affairs (CCEA) was empowered to do it.

CBI and ED, in their replies to the anticipatory bail pleas, had told the court that custodial interrogation of both the accused was required since various new material have surfaced after filing of the charge-sheet, alleging that they were not cooperating in the probe.

They have come under the scanner of investigating agencies in the ₹3,500-crore Aircel-Maxis deal and the INX Media case involving ₹305 crore.

In the charge-sheet filed earlier in the case against former Telecom Minister Dayanidhi Maran, his brother Kalanithi Maran and others, the CBI alleged that Chidambaram granted FIPB approval in March 2006 to Mauritius-based Global Communication Services Holdings Limited, a subsidiary of Maxis.

The Maran brothers and the other accused named in the CBI charge-sheet were discharged by the Special Court, which said the agency had failed to produce any material against them to proceed with the trial. The ED is also probing a separate money laundering case in the Aircel-Maxis matter, in which the Chidambarams have been questioned by the agency and their anticipatory bail is pending.

Tracing over a century of evolution of technology, the National Council of Science Museums (NCSM) has curated an exhibition of over 15 artefacts titled ‘Rare Artefacts’ in the city, which includes a vinyl gramophone disc used to record a rendering of poems and songs by Rabindranath Tagore. It was in 1932 that Tagore had recorded […]

China on Tuesday said its approval is a must for choosing the successor to Tibetan spiritual leader the Dalai Lama, rejecting the United States’ assertion that the next-in-line to Tibet’s exiled leader will be selected by the Tibetan people themselves and not by Beijing. U.S. Ambassador at Large for International Religious Freedom Sam Brownback, who […]