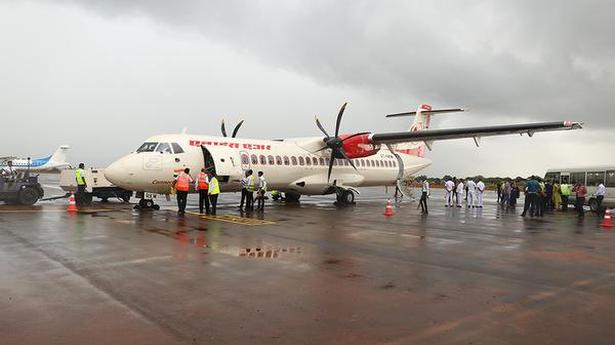 Amid pouring rain, an ATR 72-600 aircraft of Alliance Air, a wholly-owned subsidiary of Air India, completed its maiden international flight and touched down at the Jaffna International Airport, marking an important moment in Sri Lanka’s Tamil-majority Northern Province.

“India has been helping us in the development of war-affected Jaffna. There is tremendous potential for collaboration between India and Sri Lanka, especially South India and Jaffna,” Sri Lankan Prime Minister Ranil Wickremesinghe said.

Commending the roles of Indian Prime Minister Narendra Modi, External Affairs Minister, S. Jaishankar and the Civil Aviation Ministry, Mr. Wickremesinghe said, “I hope this is the beginning to fly to Batticaloa and as you have requested, we granted you permission to fly to Colombo and back. So we hope to see the full programme being implemented.”

“With the inauguration of the airport and the touchdown of our aircraft, our relations have truly touched the sky. Our projects in Sri Lanka have a direct impact on the lives of the common people,” Indian High Commissioner to Sri Lanka Taranjit Singh Sandhu said.

Flights between Chennai and Jaffna are scheduled to begin from November 1.

Five petty shops near Kamaraj statue in Gandhi Nagar were removed on Monday as part of an eviction drive. Officials said that the shops were put up encroaching road space causing hardship to the commuters. Several commuters have raised the issue with the officials. A team of officials led by N. Mathivanan, Assistant Commissioner, Vellore […]

DMK president M.K. Stalin has exhorted his party cadres to treat 2020 as election year for the party and work hard so that it may reap the benefits in the 2021 Assembly elections. In a letter to party cadres on Wednesday, Mr. Stalin said: “As far as the DMK is concerned, 2020 is an election […]

‘Historic’ pact with U.S. will be signed soon, says Taliban

The Taliban’s deputy leader said the group would soon sign a agreement with the U.S. to reduce violence for seven days, adding that militant commanders were “fully committed” to observing the “historic” accord. “That we today stand at the threshold of a peace agreement with the United States is no small milestone,” Sirajuddin Haqqani wrote […]