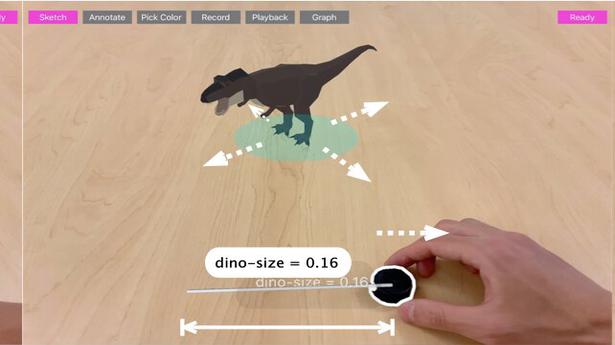 In a remote-learning set up, the teacher can record the video of the graphics and the students can download it on their smartphones and view.

Using RealitySketch, teachers can draw graphical elements on a mobile AR screen and bind them with physical objects in real-time to move the objects with corresponding physical movements. The elements can be visualised on top of a board, wall or any other object.

The user can also quickly visualise and analyse real-world phenomena through graph plots and interactive visuals, the research team stated.

Also read | Google, Disney team up to bring ‘The Mandalorian’ to AR

The tool can be used in a classroom, with the teacher sketching the motion and the students viewing in on a projector. Students can also form groups and interact with one another through the platform on their smart devices.

In a remote-learning set up, the teacher can record the video of the graphics and the students can download it on their smartphones and view.

Sketchpad was one of the first graphical user interfaces, developed by computer scientist Ivan Sutherland in 1963. This paved way for the concept of ‘human-computer interaction (HCI)’.

The death toll from the new coronavirus epidemic surpassed 3,000 on Monday as more people died in China, Iran and the U.S. and Europe raised its state of alert. The virus has now infected more than 89,000, spread to over 60 countries and threatens to cause a global economic slowdown — after first emerging in […]

Iran environmentalists receive prison sentences of up to 10 years

Six environmental conservationists accused of “spying” on Iranian military sites have received sentences of up to 10 years in prison, according to state news agency IRNA and Shargh daily. Sentences “from four to 10 years” have been issued for some of the case’s suspects, IRNA quoted judiciary spokesman Gholamhossein Esmaili as saying. Mohammad Hossein Aghasi, […]