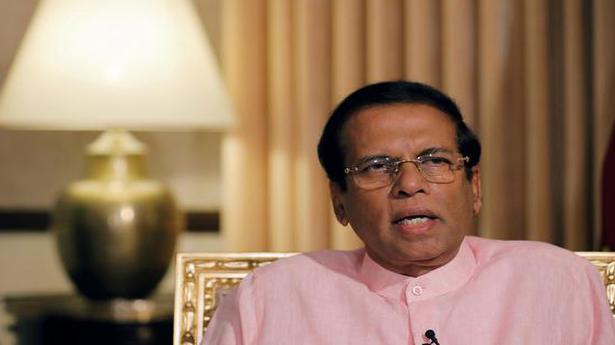 President Sirisena also “temporarily” stepped down from the position of party leader, as the SLFP appointed senior member and academic Rohana Lakshman Piyadasa as “acting chairman”. The move, according to party seniors, is to allow Mr. Sirisena to “remain neutral” in the run-up to the presidential poll.

The SLFP’s decision to back Gotabaya Rajapaksa — a powerful ex-Defence Secretary and younger brother of former President Mahinda Rajapaksa — was little surprise to Sri Lankans, even as the Rajapaksa camp consolidates political power.

The more significant development for the party — from which Presidents Chandrika Bandaranaike Kumaratunga, Mahinda Rajapaksa and Maithripala Sirisena rose to the country’s highest office — is that this is the first time that the SLFP is not fielding a candidate in Sri Lanka’s presidential election. Breaking the decades-long contest between the SLFP-United National Party (UNP), the Rajapaksas’ SLPP has emerged as a relatively new, but politically significant player.

Capturing over 40% of the vote share in the February 2018 local government elections, the SLPP emerged a powerful force, pushing the ruling UNP to the second spot, and the SLFP rump — since much of the party joined the Rajapaksas’ SLPP — to a distant third spot.

At this juncture, the SLFP’s future is a major question, according to V. Thanabalasingham, a senior journalist and political commentator.

In his view, the shift began as early as 2015. “When Sirisena took over the leadership of the SLFP after winning presidency in 2015, [Mahinda] Rajapaksa knew that the newly elected President could not consolidate and retain support of the party base,” he told The Hindu.

Over the last five years, the party has been divided between two power centres — one in government [until Mr. Sirisena decided to pull the SLFP out of it in October 2018] and another, led by Mr. Rajapaksa, in Opposition.

“Much of the turbulence in the Sirisena-Ranil [Wickremesinghe] national unity government was also about Sirisena being unable to carry his party along with him, with the constant threat of SLFP-ers shifting loyalty to the Rajapaksa camp,” said Mr. Thanabalasingham

The formation of the SLPP in 2016, and the resurgence of the Rajapaksas, coincided with the growing unpopularity of the ruling coalition, coupled with the current administration’s inability to complete probes into Rajapaksa-era killings and corruption.

In Mr. Thanabalasingham’s view, the question was never “whether” SLFP-ers would eventually gravitate towards the Rajapaksas, and by extension their new party, it was only a question of “when” they will. “The Bandaranaike legacy appears to have lost currency in Sri Lanka today. With Chandrika [Bandaranaike Kumaratunga] also out of mainstream politics, it seems that the Rajapaksa clan has replaced them.”

However, senior political scientist Jayadeva Uyangoda has a different take. The SLFP’s apparently imminent “political demise”, he notes, leaves a massive vacuum in Sri Lanka’s political landscape. The SLFP fashioned itself with a politics of assertive Sinhala-nationalist, post-colonial ideology. “It was a progressive, social democratic, centre-left political party, that made tremendous contribution to social change and democracy.”

The Rajapaksa brand of politics, according to him, has mainly inherited the party’s Sinhala-nationalist assertion, and much less of its economic outlook. “The SLPP today is a right wing, neo-conservative party that favours authoritarianism. Though ironically created by the SLFP, the SLPP doesn’t replace it, it merely displaces it,” Prof. Uyangoda adds. “The SLPP will undoubtedly tread a free market-oriented path but have Mahinda Rajapaksa to disguise its policy in state-capitalist rhetoric.”

It is in this context that the campaigns of the UNP’s Sajith Premadasa and that of Anura Kumara Dissanayake of the leftist JVP have to be viewed. “There is an attempt made by the JVP to reinvent itself as a social democratic party, and by Sajith to re-invent the free market-oriented UNP, projecting a more welfarist-populism. These developments are fascinating,” he says.

Australia will force Facebook Inc and Alphabet Inc’s Google to share advertising revenue with local media firms, the country’s treasurer said on Monday, becoming one of the first countries to require digital platforms to pay for content they use. Treasurer Josh Frydenberg said the move comes after talks with Facebook and Alphabet failed to yield […]

Billionaire Samsung scion Lee Jae-yong appeared in court on Friday for his retrial on the corruption allegations that partially fueled the explosive 2016 scandal that spurred massive street protests and sent South Korea’s then-president to prison. “I feel deeply sorry for worrying many people,” Lee said while soaking up a barrage of camera clicks before […]

President Donald Trump will be making a significant request for border wall funds and seeking money to stand up Space Force as a new branch of the military in the White House budget being released next week, an administration official said. For the first time, Mr. Trump plans to stick with the strict spending caps […]