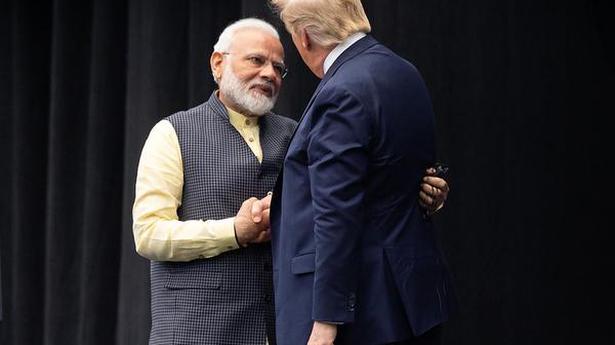 Did Prime Minister Narendra Modi endorse U.S. President Donald Trump’s 2020 re-election bid in his Houston speech on September 22? Did he wade into the domestic politics of the U.S.? These questions have resurfaced after External Affairs Minister S. Jaishankar rebuffed suggestions that he did both, during an interaction with Indian journalists in Washington DC.

“My recollection of what the Prime Minister said was that candidate Trump had used this (Abki baar Trump sarkar). So the PM is talking about the past,” said Mr. Jaishankar denying the allegation that the PM was campaigning for Mr. Trump.

What did Mr. Modi say? “The words of candidate Trump, Abki baar Trump sarkar, rang loud and clear. And his celebration of Deepavali in the House — White House — lit up millions of faces with joy and appreciation,” he had said.

Abki baar Modi sarkar was Mr. Modi’s 2014 campaign slogan that a Hindutva group in the U.S. had repurposed for Mr. Trump, who made a short campaign ad with himself uttering the Hindi slogan. So, in an oblique way, Mr. Modi was claiming some credit for Mr. Trump’s victory in 2016 and not endorsing his 2020 candidacy.

Mr. Jaishankar is right in saying that media reporting, and the response of the Opposition, largely misinterpreted Mr. Modi’s comment.

Whether or not Mr. Modi’s speech and the rally amounted to involvement in U.S. politics is a question that requires some explanation, but the answer can only be in the affirmative.

“We have a very nonpartisan (approach to domestic U.S. politics). So, our sort of approach to whatever happens in this country is their politics, not our politics,” Mr. Jaishankar said. But that is not how Houston continues to play out. Mr. Modi’s expansive diaspora politics draws from Hindutva that sees Hindus as a trans-border civilisational community with Bharat as its “natural home”.

Diaspora mobilisation in a manner not intimidating to others in a multiethnic foreign country is one thing; loud and boisterous desi rallies that brazenly seek to bend American politicians in a particular way is another. The first is soft power; the second is a menace.

Organisations and individuals who were at the forefront of the Houston rally have publicly warned the Democratic critics of Hindutva — such as Presidential aspirant Bernie Sanders, Indian American members of Congress Ro Khanna and Pramila Jayapal. They want American politicians to be pro-India, and anti-Pakistan on all questions, regardless of American interests.

This amounts to Mr. Modi’s diaspora politics trying to tilt the scale in favour of Mr. Trump and against the Democrats. And this will have repercussions.

In all this, has the Houston rally tilted Mr. Trump in India’s favour? Mr. Trump has no sympathy for human rights, democracy, etc and he personally is unlikely to raise such questions regarding India.

Mr. Modi’s effusive praise, for sure, warmed the cockles of Mr. Trump’s heart but some bruises in his ego will likely surface. Did he like doing the lap of honour with Mr. Modi around the stadium? We don’t know yet, but knowing Mr. Trump, we might get to know at some point.

“Mr. President, you had introduced me to your family in 2017 and today I have the honor to introduce you to my family, over a billion Indians and people of Indian heritage around the globe,” Mr. Modi said, introducing Mr. Trump. What did Mr. Trump think of this — where he is an ordinary husband and father as opposed to Mr. Modi’s idea about his own family as a global enterprise? We don’t know, but perhaps there is a clue. “He’s brought India together, we’ll call him the Father of India,” Mr. Trump said three days later, about Mr. Modi.

The top trade official from the Trump Administration said the U.S. is currently in a big trade negotiations with India. Source: thehindu.com Related