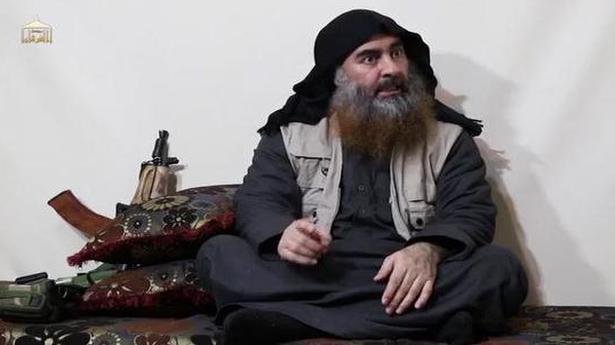 Last time when Abu Bakr al-Baghdadi appeared in a video, the Islamic State (IS) was at the pinnacle of its glory. He was seen in the pulpit of the Great Mosque of al-Nuri in Mosul, Iraq’s second largest city, after the IS declared a new “Caliphate”. Almost five years later, he reappeared in another video, released by al-Furqan, part of the IS media cell, on April 29 at a time when the IS was practically on the run. In the 18-minute video, he was seen sitting cross-legged on the floor of a room talking to a few followers, with a Kalashnikov leaning against the wall in the background. In the five years since his Mosul appearance, the IS has lost almost all territories it had captured. The remains of the al-Nuri Mosque, from where Baghdadi gave the sermons, are now with the Iraqi government. Raqqa, the de facto capital of the IS, is controlled by Kurdish militias with help from the U.S. A month ago, the IS lost Baghouz, the last slice of territory it had in Syria, to Kurdish militants.

IS is far from over

So why did he return? The state of the IS today could explain this. It appears from the video that the IS wants to continue the war it started irrespective of the setbacks it has suffered. It’s telling the world, especially the group’s supporters and sympathisers, that ‘Caliph’ Baghdadi has survived the fall of the Caliphate. Despite a $25 million bounty on his head and the massive manhunt the Western and West Asian intelligence units have launched, he’s here, alive and healthy, calling upon his followers to continue the “jihad”. The message is clear — the Caliphate may have fallen, but the IS is far from over.

Second, Baghdadi has referred to the Easter Sunday bombings in Sri Lanka in the video. “As and for your brothers in Sri Lanka, they have put joy in the heart of the monotheists with their immersing operations that struck the homes of the crusaders in their Easter, in vengeance for their brothers in Baghouz,” he said, according to an English translation of the speech by SITE Intelligence Group.

The Sri Lanka reference suggests that the video is not more than a week old. The April 21 Sri Lanka attacks, which killed more than 250 people, were one of the most dangerous suicide missions the IS has ever carried out. The bombings give Baghdadi something to boast about even in the midst of military setbacks, and use it to instigate more violence — he does exactly the same in the video.

Third, Baghdadi tells his followers what should they do. He says the Caliphate was defeated by the “crusaders”, in a reference to the West, though, in fact, the Kurdish militias (who are Sunni) in Syria and Shia militias and the national Army in Iraq played a major role in its destruction.

What he does is to place the war on the IS in the context of crusades, a series of religious wars in the medieval period largely fought between Christian Kingdoms and Muslim rulers in the Eastern Mediterranean region (which falls in today’s West Asia).

The Crusades, which started in 1095, lasted for centuries. Baghdadi was hinting that the IS’s wars will also last for a long period. “The truth is the battle of Islam and its people with the crusaders and their people is a long battle,” he said in the video. “…the war of Baghouz is over and manifested in it is the wildness and the savagery of the people of the cross towards the people of Islam… And it demonstrates the courage and resilience and persistence of the people of Islam.”

This is not the first time the IS is using the crusade imagery. In the IS literature, the Westerners have always been called crusaders. But this time, Baghdadi himself has pinpointed an enemy and asked his followers to attack them, as part of the group’s revival strategy. “So we recommend to all of you to attack your enemies and exhaust them in all of their capabilities — human, military, economic, logistical—and in all matters. Our battle today is one of attrition and stretching the enemy.”

Panamanians will choose on Sunday between six mostly business-friendly candidates to lead this Central American trade and financial hub for the next five years in a presidential election focusing on corruption and slowing economic growth. The vote takes place after revelations of money laundering in the so-called Panama Papers that dinged the country’s reputation on […]

Regional stability, situation in Iran, Afghanistan tops the talks between Qureshi and Pompeo

Pakistan Foreign Minister Shah Mahmood Qureshi has stressed on Islamabad’s commitment toward “security and stability” in South Asia as he met U.S. Secretary of State Mike Pompeo in Washington and held wide-ranging talks on bilateral issues, the situation in Afghanistan and the Middle East. Mr. Qureshi called on Mr. Pompeo on January 17 during his […]

Opposition demonstrators in Bolivia overran two state-run media outlets and forced them off the air on Saturday and some police stopped guarding the square where President Evo Morales’ palace is located, as tensions remained high after a disputed election. Demonstrators burst into the offices of Bolivia TV  and Radio Patria Nueva and forced employees to […]