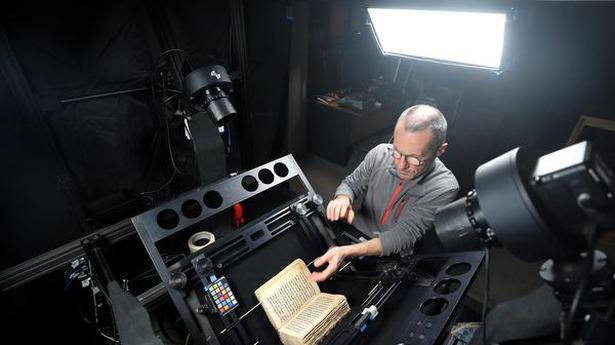 At St. Catherine’s Monastery at the foot of Egypt’s Mount Sinai, the silence in the library is broken only by low electrical humming, as an early manuscript is bathed in green light.

A team from Greece are photographing thousands of fragile manuscripts, including some of the earliest copies of the Christian gospels, using a complex process that includes taking images in red, green and blue light and merging them with computer software to create a single high-quality colour picture.

There is a tangible sense of urgency to the mission.

Although the monastery has survived centuries of warfare, it lies in a region where Islamist militants have destroyed countless cultural artifacts and documents in Syria and Iraq. Egypt’s Christian churches have also been targeted by an Islamist insurgency in the rugged and thinly populated northern Sinai.

‘The Holy Monastery of the God-Trodden Mount Sinai’ — which is part of the Eastern Orthodox church — lies in the safer southern half of the Sinai Peninsula. But in 2017, Islamic State claimed responsibility for an attack on a nearby Egyptian police checkpoint, in which one officer was killed.

“The upheaval of our times requires a rapid completion of this project,” Archbishop Damianos of Sinai, Faran and Raitho, and Abbot of St. Catherine’s Monastery, told Reuters by email.

The aim is to create the first digital archive of all 4,500 manuscripts in the library, starting with around 1,100 in the Syriac and Arabic languages, which are particularly rare. The task could take more than a decade, using digital cameras and computer arrays alongside sophisticated cradles designed to support the more fragile manuscripts.

The project began last year and is being undertaken by the non-profit research organization Early Manuscripts Electronic Library (EMEL), in collaboration with the monastery and the Library of the University of California, Los Angeles. UCLA Library said it will start publishing the manuscripts online, in full colour, from the fall of 2019.

“This library is an archive of the history of Christianity and its neighbours in the Mediterranean world, and therefore is of interest to communities all over the world who find their history here,” Michael Phelps, Director of the Early Manuscripts Electronic Library, told Reuters.

The monastery lies at the foot of Mount Sinai, by tradition the site where Moses received the Ten Commandments.

UNESCO has listed the area as a World Heritage site, citing its sacred status in Christianity, Islam and Judaism. It says St. Catherine’s was founded in the 6th century, and is the oldest Christian monastery still in use for its original function.

The most famous manuscript in the library is the 4th century ‘Codex Sinaiticus’ – a Greek manuscript of the Bible which contains the oldest surviving complete New Testament. Its pages are divided between several institutions.

Another is the Codex Syriacus, an ancient copy of the Gospels in Syriac. Other manuscripts cover science, medicine and the Greek classics. The digitization of the first stage alone, the Syriac-Arabic manuscripts, will take around three years and cost a projected $2.75 million, said Phelps.

“Throughout the centuries, monks have lived here in prayer, in dedication to spiritual goals, a witness to God’s revelation to mankind… in that sense especially, the Sinai Monastery is an ark, a spiritual ark in the wilderness,” said Father Justin of Sinai, the monasterys librarian.

The project will provide a more complete record than partial microfilming carried out decades ago by the U.S Library of Congress, and also by the National Library of Israel. The two institutions are making their records available to the new digitization effort, the project organizers said.

Analysis | To pursue or abandon? India’s options after yet another China blow on Azhar listing as global terrorist

No apology for Jallianwala Bagh for now, says U.K.

The British government has failed to use the opportunity of a parliamentary debate on the Jallianwala Bagh massacre to apologise for the atrocity, with a Foreign Office Minister referring to potential “financial implications” as one of the issues to be considered. However, Mark Field, the Minister for Asia and the Pacific, said that he recognised […]

The World Trade Organization on Monday rejected European Union claims that it no longer provides subsidies to planemaker Airbus, underscoring tariffs recently imposed by the United States on European goods. A new compliance report from the Geneva trade watchdog found that the Airbus A380 and A350 jetliners continue to be subsidised as a result of […]