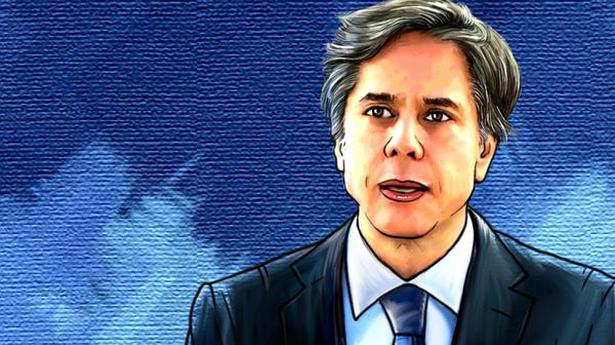 The next Secretary of State is an advocate of alliances and partnerships.

Last week, U.S. President-elect Joe Biden nominated long-time aide and adviser Antony Blinken to the post of Secretary of State. For the next four years, Mr. Blinken will, if confirmed by the Senate, lead the State Department and attempt to give shape to Mr. Biden’s ‘America is Back’ vision.

Much can be learned about the worldview of this French speaking singer and guitarist (Mr. Blinken has two songs on Spotify and leads a band called ‘Ablinken’) by studying his roots. Several members of Mr. Blinken’s family came to the U.S. as refugees and immigrants — Mr. Blinken has suggested that this has shaped his vision of America. There is also a family history of government service: Mr. Blinken’s father, Donald, was Ambassador to Hungary in the Clinton administration, and his uncle was an envoy to Belgium. His step-father, Samuel Pisar, a Holocaust survivor, worked for the UN and the U.S. government.

It is not surprising then that Mr. Blinken believes that America should lead the world but in strong cooperation with other countries and with robust multilateral organisations. This resonates with Mr. Biden’s own foreign policy view, which Mr. Blinken recently described in three words: “leadership, cooperation and democracy”.

“Joe Biden would reassert American leadership, leading with our diplomacy,” he said in July this year on Intelligence Matters, a podcast.

The world, according to Mr. Blinken, “doesn’t just organise itself” and when America retreats, another country tries to take its place in a way that does not advance America’s values or there is chaos. In terms of globalisation, Mr. Blinken said in a 2019 interview that a progressive era was needed on a global scale in order to addresses inequality. He spoke of a foreign policy that made sense to domestic constituents.

Having spent years of his childhood in Paris, following his family’s move there, Mr. Blinken has ties to Europe that go beyond his ability to speak fluent French. He is expected to recommit America to NATO and has said the U.S. should turn to Europe as an ally of the first, not last, resort. He will also oversee a foreign policy that will seek to revitalise multilateral institutions.

In terms of his views and experience, Mr. Blinken is very much part of the Washington establishment. His positions include leading Mr. Biden’s staff on the Senate Foreign Affairs Committee (a body that played an important role in the signing of the U.S.-India Civil Nuclear Deal). Later, he served as National Security Adviser (NSA) to Mr. Biden (then Vice President) and as Deputy NSA to President Barack Obama.

In 2017, Mr. Blinken founded WestExec (“a strategic advisory firm that offers unique geopolitical and policy expertise”) along with Michèle Flournoy — a possible candidate for Defence Secretary. The firm employed others like Avril Haines, Mr. Biden’s pick for directing national intelligence, and other former Democratic officials who were part of Mr. Biden’s transition team, Politico reported. As strategic consultants — rather than lobbyists — the firm’s disclosure requirements are less stringent and WestExec has not disclosed its client list. Mr. Blinken can expect questions on this during his senate confirmation hearing in 2021.

With regard to India, Mr. Blinken, like Mr. Biden, supports a view that the Indo-U.S. relationship should be the strongest of partnerships. In the climate change context, he has said — more than once — that no global challenge can be solved without India and the U.S. working together. He has also criticised President Donald Trump’s transactional approach towards India. A few months ago, Mr. Blinken told the Hundson Institute, a think tank, that the Biden administration would engage “frankly and directly” with India on topics such as the government’s actions in Kashmir (the dilution of Article 370 and associated restrictions) as well as legislation and policy related to citizenship. He has also identified China’s growing aggression (including along the Line of Actual Control) as a common challenge faced by the U.S. and India.

The U.S. must focus on the competitiveness of its own economy, strength of its own democracy and vibrancy of its own partnerships to engage with China from a position of strength, according to Mr. Blinken.

The current administration has sought to — albeit belatedly — create a coalition to stop China from dominating the world’s 5G network. Competition of this kind is likely to continue in the next administration: Mr. Blinked has said one of the most defining issues of our time will be the fault line between techno-democracies and techno-autocracies like China and which of these two groups’ rules, norms and values will prevail.

While Mr. Biden may seek to bring America back to the world, that world has changed significantly in the last few years. This is not lost on Mr. Blinken, who has said the Biden administration would engage with the world not as it was “but as it is and as we anticipate it will become” with “rising powers” and “new actors super-empowered by technology and information, who we have to bring along if we’re going to make progress”.

The Hakim family has barely moved out of their house ever since the Easter Sunday terror attacks. It doesn’t help matters that they live right across the Ibrahim household in Dematagoda. Two of the main bomber brothers, Inshaf and Ilham Ibrahim, lived here along with Ilham’s pregnant wife Fatima who was the ninth suicide bomber. […]

Over 70% suffered from ‘Zoom Anxiety’ this year, survey finds

Most respondents found video calling made them more anxious than telephone calls and nearly half of them said it was worse than face-to-face meetings. (Subscribe to our Today’s Cache newsletter for a quick snapshot of top 5 tech stories. Click here to subscribe for free.) Nearly 75% people surveyed by a UK-based design agency said […]