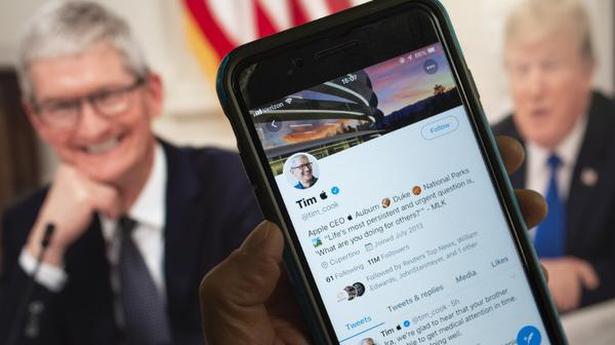 Apple CEO Tim Cook has quietly changed his Twitter profile, replacing his last name with an emoji of the company’s logo, after U.S. President Donald Trump mistakenly referred to him as “Tim Apple”, a verbal slip which netizens poked fun at by sharing rib-tickling memes on social media.

At a meeting of the American Workforce Policy Advisory Board at the White House on March 6, President Trump, while addressing the leaders of industries, appreciated Mr. Cook for his “big investment” in the U.S. and referred to the tech executive with a new nickname “Tim Apple”.

“We have so many companies coming in. People like Tim, you’re expanding all over and doing things that I really wanted you to do right from the beginning. I used to say, ‘Tim, you’ve got to start doing it over here’, and you really have. I mean, you’ve really put a big investment in our country. We appreciate it very much, Tim Apple,” Mr. Trump said.

Mr. Cook responded to the funny side of the situation by changing his Twitter name to “Tim Apple” on March 7, with the Apple an emoji of his company’s logo, ABC News reported.

Mr. Trump is known for using nicknames and ‘mispronouncing names’ of people such as “Jeff Bozo” in reference to Jeff Bezos of Amazon. Last year, he had called Lockheed Martin CEO Marillyn Hewson “Marillyn Lockheed.”

Mr. Trump’s gaffe did not go down well with many netizens poking fun at the President’s awkward slip of tongue by sharing rib-tickling memes on social media.

“A Tim Apple a day keeps the doctor away,” wrote another.

Earlier in 2016, Mr. Trump was critical of Apple as the tech giant refused to unlock the suspected San Bernardino shooter’s iPhone for the FBI. He even called for a boycott of the company’s products.

When Mr. Trump was running his presidential campaign, he tweeted that he had sold his stock in Apple as the company wasn’t making bigger phones “like Samsung”.

Mr. Cook has previously criticised Mr. Trump’s decision to withdraw from the landmark Paris climate accord and condemned the President’s travel ban.

Dr Zafar Mirza, the special assistant to the Prime Minister on health services, said that he was experiencing “mild symptoms” Source: thehindu.com Related

Chinese Ambassador to India Luo Zhaohui said on Sunday that Beijing “understands” India’s concern with regards to Jaish-e-Mohammed chief Masood Azhar and said the matter will be resolved soon. “Regarding Masood Azhar we fully understand and we fully believe this matter. We understand India’s concerns and are optimistic this matter will be resolved,” he said. […]