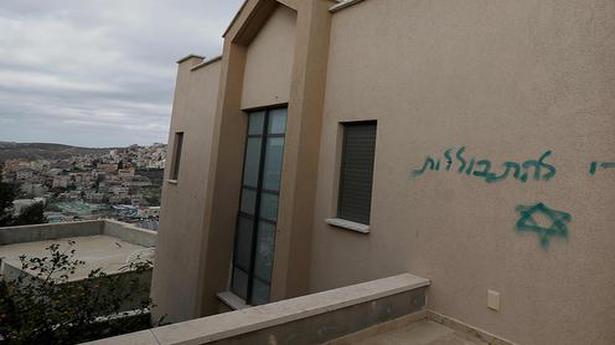 Dozens of cars in an Israeli Arab village were vandalised overnight, police said on Tuesday, with slogans sprayed on a mosque indicating the involvement of Jewish extremists.

The slogans “Jews awaken” and “Stop assimilating” were scrawled on a mosque and another building in Jish, a small village in the Galilee just south of Israel’s border with Lebanon.

Police said they were investigating the incident.

The tyres of over 150 cars were punctured, Jish council head Elias Elias said, adding that it was not the first time the mixed Muslim and Christian village had been targeted.

Prime Minister Benjamin Netanyahu “firmly condemned” the Jish vandalism and slogans, vowing to “find the outlaws and bring them to justice. “We won’t tolerate any attacks on our citizens,” he said in a statement.

U.N. Secretary-General Antonio Guterres says the United Nations remains committed to supporting Palestinians and Israelis in resolving their conflict on the basis of U.N. resolutions, international law and bilateral agreements. Antonio Guterres says the U.N. is also committed to realizing the vision of two states “living side by side in peace and security within recognized […]

A drone-like flying taxi whirred over Singapore’s waterfront on October 22, with the firm behind the test hoping the aircraft will revolutionise travel in traffic-choked Asian cities. The 18 propeller vehicle, developed by German firm Volocopter and with a pilot onboard during the test flight, took off from a promontory and flew for about two […]

Pope Francis arrived late for his weekly address in St. Peter’s Square on Sunday, explaining that he had been stuck in an elevator in the Vatican for 25 minutes and had to be freed by firefighters. “I have to beg your pardon,” the smiling pontif said as he started the address about 10 minutes late. […]