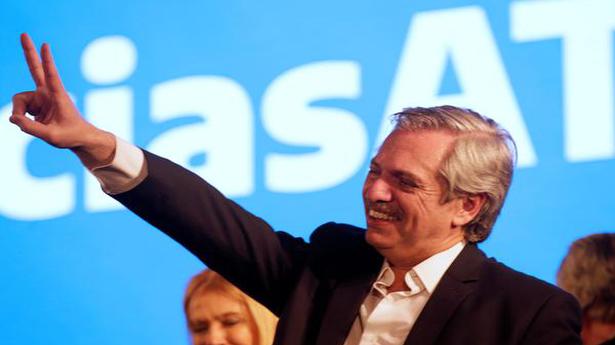 Argentine markets are expected to fall on Monday after President Mauricio Macri was ousted in an election by Peronist rival Alberto Fernandez, though economists said the impact could be cushioned by a stronger-than-expected showing by the conservative leader.

Peronists swept back into power on Sunday, ousting Mr. Macri in an election result that shifts Latin America’s No. 3 economy firmly back toward the left after it was battered by economic crisis.

With votes almost all counted, Mr. Fernandez had around 48% of the vote to Mr. Macri’s 40% – a wide enough margin to win in the first round, but a far better result for Macri than a landslide defeat in an August primary which sparked a market collapse.

“The next Peronist government will be under pressure with a strengthened opposition…. it is not a blunt victory for Alberto Fernandez,” said Ariel Coremberg, director of the Center of Productivity Studies at University of Buenos Aires.

Alberto Fernandez and Macri are set to meet together early on Monday morning to discuss the political transition, a move which could help calm markets.

Central bank chief Guido Sandleris will also hold a press conference before markets open, after the bank steeply cut the amount of dollars individual entities could buy in the early hours of Monday morning.

Investors are closely watching signals from Mr. Fernandez in the coming weeks on how his government plans to approach Argentina’s international bondholders and its $57 billion financing deal with the International Monetary Fund as default fears linger.

Julio Nogues, an economist and member of Argentine National Academy of Economic Sciences, said early signs were Mr. Fernandez would look to avoid Argentina becoming isolated, while traders were looking to see how he would control the peso.

“If you don’t put the house in fiscal order, and you tighten the exchange controls, you’re going directly to another fiscal crisis.”

Argentina’s overseas-listed bonds, including the Argentine century bond and January 2028 benchmark would likely indicate the first signs of market reaction on Monday morning when markets open in Asia and Europe.

A Pakistani court on Tuesday summoned an official of the Counter Terrorism Department (CTD) of Punjab police on a petition filed by Mumbai attack mastermind and JuD chief Hafiz Saeed challenging his arrest in the terror financing cases. The Lahore High Court held the hearing after Saeed and 67 other leaders of Jammat-ud-Dawah (JuD) and […]

Rescuers took advantage of improved weather on Nepal’s Mount Annapurna to press ahead with a search for four South Korean climbers and three Nepali guides and have a possible location for them, officials said on January 22. Nine soldiers and seven civilian rescuers were digging through ice and snow on the Annapurna trekking trail and […]