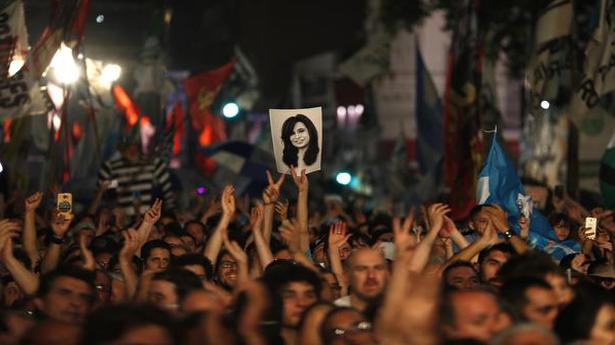 Argentina’s Peronists celebrated their return to power after incumbent President Mauricio Macri conceded defeat in a dramatic election that likely swung the country back to the center-left, saw the return of a divisive former President and threatened to rattle financial markets.

“Today, Alberto is the president of all Argentines,” Cristina Fernŕndez told supporters, some of whom brandished tattoos with her image and the image of her late husband and predecessor as President, Nestor Kirchner.

Late Sunday night, authorities said Alberto Fernŕndez had 48.1% of the votes compared to 40.4% for Mr. Macri, with almost 97% percent of the votes counted. He needed 45% support, or 40% support with a 10 percentage point lead, over the nearest rival to avoid a runoff vote on November 24. No official winner has yet been declared.

The election was dominated by concerns over the country’s economic woes and rising poverty, with voters rejecting austerity measures that Macri insisted were needed to revive the struggling economy.

“The only thing that concerns us is that Argentines stop suffering once and for all,” Alberto Fernŕndez told the crowd.

The 60-year-old lawyer said he would need the support of Mr. Macri’s administration to reconstruct what he called the inherited “ashes” of Argentina.

“We’re back and we’re going to be better!” he said.

Earlier in the evening, Mr. Macri told disappointed supporters that he had called Alberto Fernŕndez to congratulate him and invited him for a breakfast chat Monday at the presidential palace.

“We need an orderly transition that will bring tranquility to all Argentines, because the most important thing is the well-being of all Argentines,” Mr. Macri said.

Argentina’s inflation rate is one of the highest in the world, nearly one third of Argentines are poor and its currency has plunged under Mr. Macri, who came into power in 2015 with promises to boost South America’s second-largest economy and one of the world’s top grains suppliers.

When Mr. Macri did surprisingly poorly in August party primaries, which are seen as a barometer of candidate popularity, stocks plunge and the peso depreciated on the possibility of a return to the interventionist economic policies of Cristina Fernŕndez, who governed from 2007 to 2015.

Argentina’s Central bank said early Monday that it would sharply limit the amount of Dollars that people can buy amid growing worries of a rapid loss of foreign exchange following Macri’s apparent loss. The bank said dollar purchases will be restricted to $200 a month by bank account and $100 cash until December. The previous amount allowed was $10,000 a month.

“The last two years have been brutal in Argentina,” said Benjamin Gedan, an Argentina expert at the Woodrow Wilson International Center for Scholars. “Voters have suffered a painful recession, unimaginably high inflation and a debt crisis. No incumbent could survive in these conditions.”

Mr. Gedan said Fernŕndez is “an untested leader,” whose proposed solutions to Argentina’s daunting challenges remain a mystery and who inherits a ruinous economy and unfavorable international conditions.

Sunday’s result would also mark a dramatic return to high office for Cristina Fernŕndez, who opponents say might be the real power behind Alberto Fernŕndez’s throne. The running mates – who are not related – dismiss those concerns.

Alberto Fernŕndez served as chief of staff from 2003 to 2007 for Kirchner. He remained in the position during part of Cristina Fernŕndez’s term as president but left after a conflict with farmers in 2008.

“I’m so happy. We were waiting for this change for a long time. We’re tired of everything that has been happening,” said Fernŕndez supporter Juan Jose De Antonio, 46.

For many voters, the Fernŕndez ticket was more palatable because the moderate Alberto Fernŕndez was in the top spot, handpicked – in a shrewd move – by Cristina Fernŕndez, who represents the more radical wing of the Peronist party and enjoys hard-core support of some 30% of Argentines, according to Michael Shifter, head of the Inter-American Dialogue, a Washington-based think tank.

“The government of Alberto Fernandez and Cristina Kirchner will feature Peronists of varied political tendencies, but the crucial question is what the dynamic will be between the pragmatic president and more ideological and polarizing vice president,” Mr. Shifter said. “The nature of that power struggle will determine the direction of Argentina’s economic, social and foreign policy in coming years.”

Mr. Shifter said that despite some market fears, a return of the populist policies under Cristina Fernŕndez is highly unlikely.

“Today Argentina simply does not have the economic conditions for unchecked spending,” he said. “This will not be a replay of her presidency.”

The result would mark a shift leftward for South America, which has seen conservative governments elected in Brazil, Colombia and Chile in recent years. Cristina Fernŕndez was considered part of the “pink tide” of leftist governments that arose in the region in the 1990s and 2000s.

Some of Argentina’s neighbors have experienced social upheaval recently fueled by discontent over corruption, inequality and slowing growth.

Prior to Sunday’s election, many Argentines had taken to the streets to protest the loss of purchasing power under high consumer prices and frustrated with cuts in subsidies that have led to rises in utilities and transportation costs.

“This thing that happened in Argentina, what has been happening in the sister country of Chile, and recently in Ecuador, must open our minds, not just among political leaders, but all business and social leaders about the unviability of political and economic models based on permanent adjustments,” said Cristina Fernŕndez.

Mr. Macri retained wide support among the key farming sector in one of the world’s top suppliers of grains. But overall frustration over the economy eroded the popularity of the pro-business former mayor of Buenos Aires and ex-president of the popular Boca Juniors soccer club.

Argentina faces tough challenges ahead. Its commodities exports – the backbone of its economy – are vulnerable to a tough global outlook. It has huge foreign debt. The World Bank forecasts that Argentina’s economy will shrink 3.1% this year. More than a third of the country is poor, unemployment is at 10.6%, and consumer prices are expected to hit 55% this year.

On the election trail, Fernŕndez criticized Mr. Macri’s decision to seek a record $56 billion bailout from the International Monetary Fund, an unpopular institution in Argentina that is blamed for creating the conditions that led to the country’s worst economic meltdown in 2001.

“Argentina will be on even more uncertain ground as negotiations with the IMF could go either way,” said Monica de Bolle, senior fellow at the Peterson Institute for International Economics.

On the campaign trail, Mr. Macri pleaded for more time to reverse fortunes and reminded voters of the corruption cases facing Cristina Fernŕndez, who has denied any wrongdoing.

Argentines also chose 130 lower house seats and 24 senators in Congress, as well as regional mayors, governors for three provinces and the head of government for the Argentine capital.

Bangladesh Prime Minister Sheikh Hasina has sought the help of a leading Indian cardiac surgeon in determining the treatment of her ailing senior Cabinet colleague. Hasina called the Bengaluru-based Dr Devi Shetty on Sunday evening and requested him to come to Dhaka to examine the health condition of Bangladesh minister for Road, Transport and Bridge, […]

Cambodia says all COVID-19 patients recovered, no new cases for a month

Cambodia has reported 122 cases of the virus that causes COVID-19 and no deaths from the disease since it emerged in China and started spreading around the world, infecting more than 4.5 million and killing about 300,000 since January. Source: thehindu.com Related

Gotabaya Rajapaksa wants a probe into the disappearances of over 20,000 people in the country’s brutal civil war with Tamil Tiger rebels, his office said in a clarification after the Sri Lankan President declared the missing persons “dead” in a first-ever admission to a UN official. Gotabaya Rajapaksa, the former wartime defence secretary who played […]