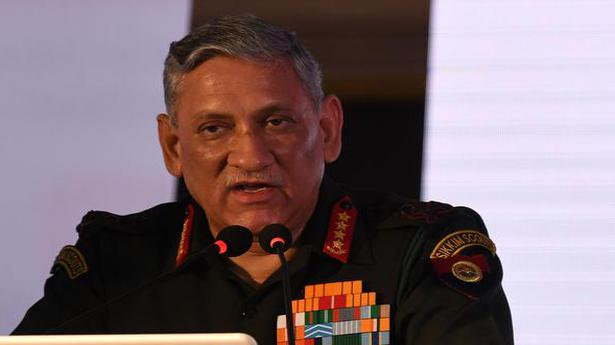 The Chief of Army Staff (COAS) visited various forward locations of Samba and Ratnuchak in Jammu region to review the operational deployment and preparedness, a defence spokesman said.

The Army chief also interacted with the troops in forward locations, the spokesman said.

Gen. Rawat expressed complete confidence in capabilities of the Indian Army to thwart any nefarious design of enemies of the country and handle any situation.

The COAS also praised the high state of moral and preparedness of the troops, the spokesman said.

General Rawat arrived here on Saturday and visited the headquarters of White Knight Corps to review the operational preparedness of the forces in the Corps Zone in view of the current situation along the Line of Control (LoC) and the International Border (IB).

During the visit, the COAS was briefed and updated by GOC White Knight Corps Lt Gen Paramjit Singh about the current operational situation, prevailing security scenario and the preparedness of the formation.

This was the first visit of the Army chief to the region after India’s pre-emptive strikes on Jaish-e-Mohammed’s terror camps at Balakot in Khyber Pakhtunkhwa province in Pakistan.

Barring ceasefire violation in Nowshera sector of Rajouri district from 12.30 pm to 2.30 pm on Saturday, there were no reports of firing in the rest of the sectors since 11 pm Friday.

More than 80 forward villages were targeted by Pakistan in over 50 ceasefire violations in Rajouri and Poonch districts since Tuesday, which left four civilians, including three members of a family, dead and several others injured.

At least 21 people were killed when the most powerful earthquake to strike Albania in decades shook the capital Tirana and the country’s west and north on Tuesday, tearing down buildings and burying residents under rubble. Residents, some carrying babies, fled apartment buildings in Tirana and the western port of Durres after the 6.4 magnitude […]