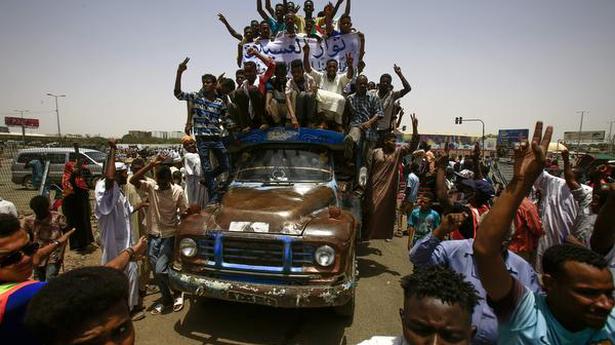 A joint committee representing Sudan’s military leadership and protesters will hold its first meeting on Saturday to discuss their demand for civilian rule.

Earlier this week, the two sides agreed to set up a joint committee to chart the way forward.

The Alliance for Freedom and Change, which brings together grassroots organisers with opposition and rebel groups, has kept up mass protests for a return to civilian rule since Mr. Bashir’s overthrow after three decades in power.

“The joint committee with the military council will hold its first meeting on Saturday,” the AFC said.

Western governments have expressed support, but Sudan’s key Gulf Arab lenders have backed the military council, while African states have called for more time for the army to hand over to civilians.

The Afghan government will gradually release 5,000 Taliban prisoners starting this week if the insurgents significantly reduce violence, President Ashraf Ghani’s spokesman said Wednesday, paving the way for peace talks following a U.S. withdrawal deal. The government will “release 1,500 Taliban prisoners as a gesture of goodwill” starting Saturday, with another 3,500 to be freed […]

The rising stars of the Communist Party

Ever since last year’s 19th Congress of the Communist Party of China (CPC), when it became clear that President Xi Jinping would steer China indefinitely, speculation about the next line of Chinese leadership has been rife. It is now an open secret that most aspirants born in the 1960s are likely to fade away before […]

Jeffrey Epstein’s prison death has been ruled a suicide by hanging, the medical examiner’s office said on Friday. Epstein, 66, was found dead in his cell at the Metropolitan Correctional Center in New York City on August 10, touching off outrage and disbelief over how such a high-profile prisoner, known for socializing with powerful people […]