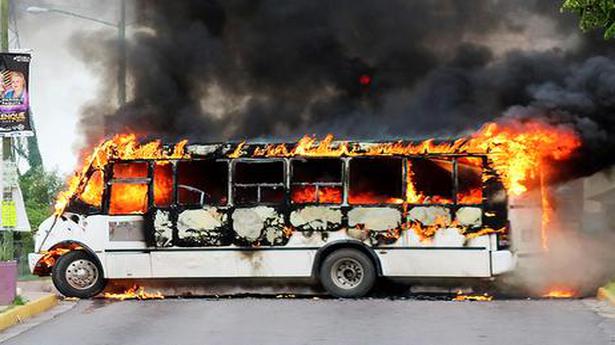 Security Minister Alfonso Durazo said soldiers on a routine afternoon patrol came under fire from a residence in the state capital, Culiacan.

He said they responded by taking the house and detaining four people inside, including Ovidio Guzman, one of several sons of ‘El Chapo’, who have partly taken over the Sinaloa cartel since he was extradited to the United States in 2017.

Cartel gunmen then “surrounded the house, outnumbering the soldiers,” and began a massive assault on various parts of the city, Mr. Durazo said.

That triggered an hours-long battle that left blazing vehicles strewn across the street and sent terrified residents running for shelter.

“In order to protect the greater good, the people of Culiacan’s safety and well-being, the (federal government’s) security cabinet decided to suspend said actions,” Mr. Durazo said in a video message.

According to Mexican media reports, Ovidio Guzman was released as troops suspended the action.

Mr. Durazo said the security cabinet would travel to Culiacan to personally oversee the next steps. Officials were due to give a press conference in the western city at 6.45 a.m. (1245 GMT) Friday.

Some panicked drivers abandoned their cars in the middle of the street to take cover from the deafening gunfire.

Gunmen blocked roads and highways into the evening, bringing the city of 7,50,000 people to a standstill, AFP journalists said.

Sources in the Sinaloa state government speaking on condition of anonymity said police officers had been wounded.

They also said an unknown number of inmates had escaped from the Aguaruto prison in Culiacan amid the chaos.

The state government said it was “working to restore calm and order in the face of the high-impact incidents that have occurred in recent hours in various points around Culiacan.”

It called on residents to “remain calm, stay off the streets and be very attentive to official advisories on the evolving situation.”

“El Chapo,” 62, was sentenced to life in prison in July for trafficking hundreds of tons of cocaine, heroin, methamphetamine and marijuana into the United States over the course of a quarter-century.

However, his cartel remains one of the most powerful in Mexico.

Guzman’s extradition unleashed an initial period of instability in the group, as Ovidio and his brothers waged war with cartel co-founder Ismael “El Mayo” Zambada for control, leaving a trail of bodies in their wake.

New Zealand Prime Minister Jacinda Ardern said her office received a “manifesto” from the gunman suspected of killing 50 people in two Christchurch mosques minutes before Friday’s attack. “I was one of more than 30 recipients of the manifesto that was mailed out nine minutes before the attack took place,” Ms. Ardern told reporters on […]

Writer and refugee Behrouz Boochani left the Australian-run offshore Pacific detention camp where he has been held for six years, arriving in New Zealand late on Thursday to speak at a literary festival. “I just arrived in New Zealand. So exciting to get freedom after more than six years….Thank you to all the friends who […]