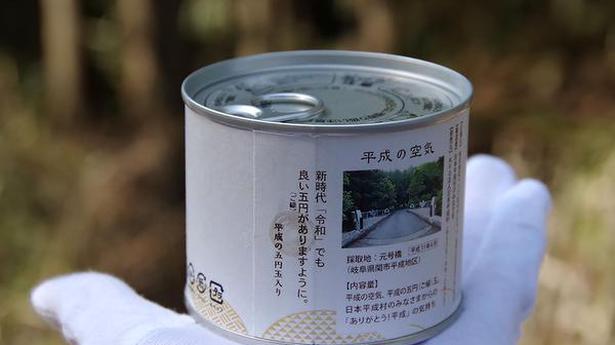 With just days until Japan ushers in a new era with the crowning of a new emperor, one entrepreneurial company is cashing in by selling cans containing “the air of the outgoing era” — a breeze at $10.

“Air is free of charge but we hope people will enjoy breathing the fresh air of Heisei after the new era comes, or just keep it as a momento,” company president Minoru Inamoto said.

The cans have been produced in the central Japanese village of Henari, which is written using the same characters as those used for “Heisei”, he said, adding that the cans can be snapped up at a roadside station and online.

They contain nothing but “the air of the current era” and a five-yen coin, often considered a lucky charm.

Firms around Japan are scrambling to produce memorabilia from the outgoing era before the country enters the “Reiwa” era on May 1 when new emperor Naruhito ascends the Chrysanthemum Throne.

Gold coins engraved with Heisei are selling like hot cakes at Tokyo department stores, while confectionery makers are bringing back blockbuster sweets popular during the Heisei era.

Henari is seeing an influx of merchants selling everything from chocolate to polo shirts and alcohol bearing the name.

Another 70 people test positive for coronavirus on ship in Japan

Another 70 people aboard a quarantined cruise ship in Japan have tested positive for the coronavirus, bringing the total to 355 cases, Japanese health minister Katsunobu Kato said on Sunday . The Diamond Princess, owned by Carnival Corp, has been quarantined since arriving in Yokohama, south of Tokyo, on Feb. 3, after a man who […]

Spain’s Parliament on Tuesday confirmed Socialist leader Pedro Sanchez by a razor-thin margin as Prime Minister for another term at the helm of the country’s first-ever coalition government since its return to democracy in the 1970s. Mr. Sanchez, who has stayed on as a caretaker premier, won 167 votes in the 350-seat Assembly compared to […]

Paris prosecutors on Friday opened a rape investigation into author Gabriel Matzneff, a day after the publication of a book detailing his sexual relationship with a girl of 14 over three decades ago. The case has attracted huge interest in France, which is only now beginning to scrutinise attitudes after decades of what is seen […]