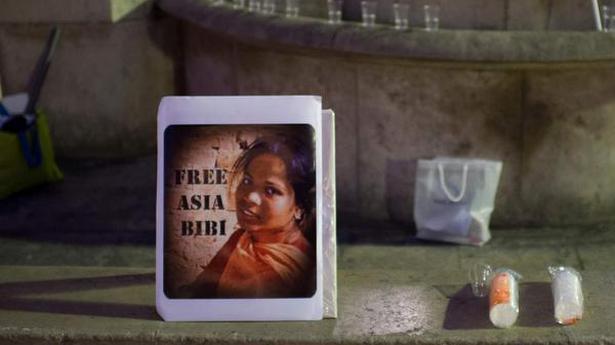 Asia Bibi, a Christian woman who was acquitted by the Supreme Court of blasphemy last year, has finally left Pakistan for Canada to be reunited with her family. She had been falsely accused of blasphemy in 2009 and spent more than eight years in prison.

The Tehreek-e-Labbaik Pakistan (TLP), an Islamist political party, staged protests across Pakistan after Ms. Bibi’s acquittal and demanded that she be hanged. Ms. Bibi was kept in protective custody till she finally left the country.

TLP leader Khadim Rizvi and other activists were later arrested for creating unrest in the country and incitement to violence. Rizvi is still in jail.

Saroop Ijaz, a lawyer who works for the Human Rights Watch in Pakistan, said it is a relief that Ms. Bibi’s ordeal has come to an end. “However, it is a scandal that it took so long, particularly after the Supreme Court decision. Asia’s case spotlighted the failure of the justice system at all levels and the lack of political will to fix. Hopefully, that will change now,” Mr. Ijaz told The Hindu.

“I am very happy that Asia Bibi is safe and finally reunited with her family,” said Saif-ul-Malook, her lawyer. After her acquittal, the Netherlands gave Mr. Malook asylum as there were threats to his life for representing Ms. Bibi.

“I went there for a while but when Asia’s review petition came up, I gave up my asylum and came back to Pakistan to represent her,” he told The Hindu. Mr. Malook has been nominated for the prestigious Roosevelt Four Freedoms Award. “I didn’t take up Asia’s case for any accolades or awards. It was my duty as a human rights defender.”

Journalist Abbas Nasir tweeted: “As Asia Bibi finally reaches shores where she’ll be free and safe, I can visualise Salmaan Taseer wearing the widest of smiles wherever he is” to which late Governor Punjab Taseer’s wife Aamna Taseer responded by saying: “He would be very pleased. Justice finally!” Taseer was assassinated in January 2011 by his bodyguard Mumtaz Qadri for defending Ms. Bibi.

Multiple rockets hit an Iraqi base hosting American troops near the U.S. embassy early Sunday, the latest in a flurry of attacks against U.S. assets in the country. “The Coalition confirms small rockets impacted the Iraqi base hosting (coalition) troops in the International Zone… No casualties,” said coalition spokesman Myles Caggins. An Iraqi military statement […]

Since the March 15 terror attack in Christchurch, New Zealand, where a far-right extremist killed 50 people in mosques, media focus has shifted to such groups operating in Europe. One such group is the Identitarian Movement, known for its radical “activism” against Muslims, migrants, refugees and other minorities. While the movement calls itself a “patriotic […]