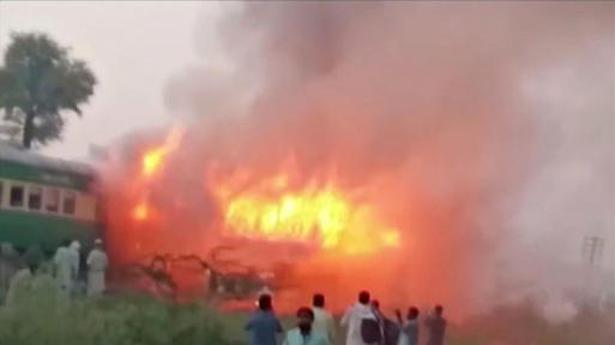 At least 74 people were killed and dozens injured after cooking gas cylinders exploded on a train packed with pilgrims in Pakistan on Thursday, some dying after leaping from carriages to escape the inferno, authorities said.

Television footage showed flames pouring out of three carriages as people could be heard crying during the incident, in a rural area of central Punjab province.

Some of the passengers had been cooking breakfast when two of their gas cylinders exploded, Ali Nawaz, a senior Pakistan Railways official, said.

Railways Minister Sheikh Rasheed Ahmed said it had been “tradition” for authorities to allow people travelling to the festival to board trains carrying cooking cylinders. “I admit our mistake… this will not happen in the future,” he told journalists in televised comments from the nearby city of Multan.

“A tragedy that could have been avoided but ever since I can recall while travelling by train no baggage check or restrictions enforced,” Human Rights Minister Shireen Mazari tweeted.

Dozens of people crowded along the tracks staring at the burning carriages, which had been disconnected from the rest of the train, television images showed.

Firefighters rushed to the scene near Rahim Yar Khan district. Rescue workers and soldiers could also be seen, as bodies were carried away covered in white sheets.

“A cylinder exploded and I don’t know how, fire erupted everywhere,” one survivor, Muhammad Imran, told AFP from a hospital.

“I jumped out of the train to save my life. There was a whole line of people behind me, they pushed,” he said.

Muhammad Nadeem Zia, a medical superintendent at the hospital in Liaquatpur, the nearest town, said some of the victims were killed by head injuries sustained as they leapt from the moving train. He said at least 44 people had been injured.

Those hurt were being rushed to hospitals in the nearby city of Bahawalpur and elsewhere in Rahim Yar Khan district. Officials said many of the bodies were charred beyond recognition.

Prime Minister Imran Khan said he was “deeply saddened” by the tragedy and had ordered an urgent inquiry. Mr. Khan said the train was the Tezgam, one of Pakistan’s oldest and most popular rail services, which runs between the southern port city of Karachi to the garrison city of Rawalpindi, neighbouring Islamabad.

It had been diverted to facilitate the religious pilgrims travelling to Lahore.

Passengers were travelling to attend the annual Tablighi Ijtema, one of Pakistan’s biggest religious gatherings, which each year sees up to 4,00,000 people descend on a tented village outside Lahore for several days to sleep, pray and eat together.

The majority of those killed were pilgrims from southern Sindh province, Mr. Nawaz said.

The Tablighi Ijtema, which begins on October 31 and concludes on November 3, was founded by religious scholars over five decades ago and focuses exclusively on preaching Islam.

It usually sees hundreds of camps and sub-camps set up on the dusty site outside Lahore to accommodate people from across Pakistan, giving the gathering a festival feel.

Stalls sell cooked food, raw chicken and meat, vegetables and fruit, and even electrical appliances and batteries for mobile phones at a subsidised rate.

Mr. Nawaz said two of the carriages were economy coaches, while one was business class, and that up to 88 passengers can fit into each.

Train accidents are common in Pakistan, where the railways have seen decades of decline due to corruption, mismanagement and lack of investment.

In July, at least 23 people were killed in the same district when a passenger train coming from Lahore rammed into a goods train that had stopped at a crossing.

Afghan, international and Taliban forces will observe a seven-day period of reduced violence in Afghanistan beginning at midnight (1930 GMT), a senior Afghan official said on Friday. “Based on the plan, the reduction in violence (RIV) will start between the Taliban and international and Afghan security forces for one week,” a spokesperson for the Afghan […]