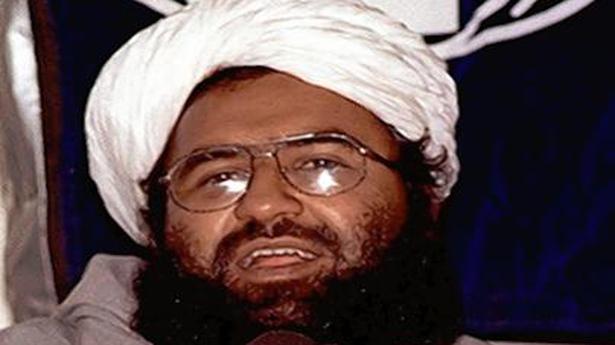 China on Wednesday signalled that it was not yet prepared to step aside and allow the United Nations Security Council (UNSC) to list terror outfit Jaish-e-Mohammed (JeM) founder-leader Masood Azhar as an international terrorist, hours before the world body is to meet for a crucial vote.

In response to a question on China’s stance on banning Azhar at the 1267 committee of the UNSC, Chinese foreign ministry spokesperson Lu Kang said Beijing wanted a closure of the issue, based on consensus achieved through dialogue.

“I want to say that China always adopts a responsible attitude, engage in consultations with various parties and properly deal with this issue,” Mr. Lu said.

“The discussions, I want to say must follow the rules and procedures of the relevant bodies and only the solution that is acceptable to all sides is conducive for resolving the issue,” he added.

China’s stand contradicts the position adopted by New Delhi, which is open for talks, following visible and verifiable action against Pakistan-based terror groups that target India.

China has, on three occasions, placed a “technical hold” on Azhar’s designation as a global terrorist in the 1267 committee. Yet another attempt on the JeM chief’s designation, led by the United States, France and Britain, has begun following the February 14 Pulwama car bomb attack that killed more than 40 CRPF personnel.

Mr. Lu said the Chinese position on Azhar was delinked from the immediacy of the Wednesday’s vote at the 1267 committee of the UNSC. “First, I want to clarify that I don’t recall saying anything about the deadline about the UNSC committee and other UN subsidiary bodies,” he stated.

Analysts say that China has committed itself to high profile “mediation” between India and Pakistan, which comprehensively addresses all the vectors that lock India and Pakistan in an adverse relationship, without being fixated on the issue of listing Azhar alone.

On Monday, the Chinese foreign ministry reiterated that Beijing was involved in “mediation” to ease tensions between India and Pakistan. It also took credit for dialing down tensions between the two nuclear-armed states in the subcontinent, based on “extensive and in-depth communication with both parties.”

Last week, China’s state councilor and foreign minister Wang Yi, for the first time, affirmed that Beijing was engaged in “mediation efforts” to ease tensions between India and Pakistan, following the Pulwama attack.

President Xi Jinping on Wednesday assured Prime Minister Imran Khan that the friendship between China and Pakistan is “unbreakable and rock-solid” despite changes in the international and regional situation. Mr. Xi made the remarks when he met Khan at the Diaoyutai State Guesthouse here, two days before he leaves for India to hold the second […]

A Philippine volcano belched smaller plumes of ash but shuddered continuously with earthquakes and opened cracks in roads on Thursday as police blockaded at-risk towns due to fears of a bigger eruption. A crater lake and nearby river have dried up in signs of the Taal volcano’s continuing restiveness, and officials have warned people against […]

The United States is expected to announce on Monday that all importers of Iranian oil will have to end their imports shortly or be subject to U.S. sanctions, a source familiar with the situation told Reuters. The source confirmed a report by a Washington Post columnist that the administration will terminate the sanctions waivers it […]