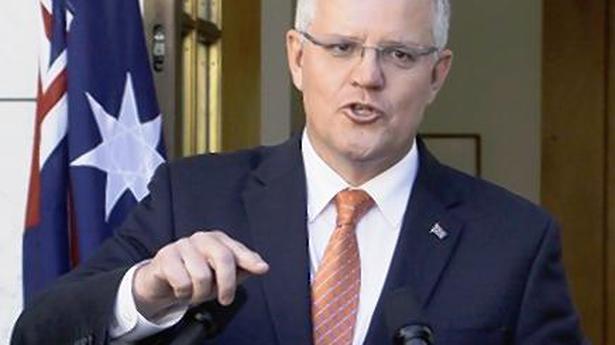 Australia’s prime minister on Thursday played down any potential link between the arrest of a suspected Islamic State group member in Turkey and a World War I battle commemoration attended by hundreds of Australians and New Zealanders at the Gallipoli peninsula.

A Syrian national was detained in Tekirdag province before the annual gathering for a dawn service at ANZAC Cove to mark the April 25, 1915, landing of Australian and New Zealand Army Corps troops in an ill-fated campaign to take the Dardanelles Straits, according to media reports.

Prime Minister Scott Morrison said the arrest took place three driving hours from the Gallipoli service and no changes to security had been made as a result.

“The reports that we are receiving are inconclusive about any link between that arrest and any possible planned event at Gallipoli itself,” Morrison told reporters. “In fact, to make that assumption would be, I think, making a very big assumption.”

Mr. Morrison said Australian Defence Force Chief Gen. Angus Campbell was representing Australia at the service and had nothing but praise for the work of Turkish police and military to provide security.

Concerns about Australians and New Zealanders’ safety at Gallipoli escalated last month when a diplomatic row flared between Turkey and Australia after an Australian was arrested in the killings of 50 worshippers at two mosques in New Zealand on March 15.

Turkish President Recep Tayyip Erdogan warned Australians and New Zealanders going to Turkey with anti-Muslim views would return home in coffins, like their ancestors who fought at Gallipoli.

Mr. Morrison slammed the comments as “highly offensive,” but later said tensions had eased after Erdogan’s office explained the president’s words were “taken out of context.” ANZAC Day services were held throughout Australia and New Zealand on Thursday, with Britain’s Prince William laying a wreath in the New Zealand city of Auckland.

The Duke of Cambridge will on Friday visit the mosques in Christchurch where 50 Muslims were killed and another 50 wounded.

Numbers attending the dawn service at Gallipoli have been down since the centenary in 2015.

Dennis Basham, global head of sales for On The Go Tours, said his company did not receive any requests from tourists to cancel trips to Gallipoli as a result of the tensions following the Christchurch massacre.

While Mr. Erdogan referred to Australian and New Zealand soldiers leaving Turkey in coffins, they were actually buried at Gallipoli.

A monument near the Australian War Memorial in Canberra to the Turks’ victorious military commander at Gallipoli, Kemal Ataturk, is inscribed with his reassuring words to Australians that their war dead “are now lying in the soil of a friendly country.”

Ataturk is quoted at the memorial as the first president of the Turkish Republic saying in 1934: “You, the mothers who sent their sons from faraway countries, wipe away your tears; your sons are now lying in our bosom and are in peace. After having lost their lives on this land they have become our sons as well.”

But Neil James, chief executive of the security think tank Australian Defense Association, said Australians and New Zealanders should not expect that Turkey will always extend a welcome mat for large-scale Gallipoli commemorations. The battle is increasingly being seen in Turkey as a religious war.

“It’s the Islamist nationals who are now running the show and I can actually foresee a time where we don’t have major ceremonies at Gallipoli anymore because it just wouldn’t be possible culturally and politically in Turkey,” Mr. James said.

“What we’ve taken for granted as having access at the Turks pleasure to the Gallipoli peninsula might not be a long-term proposition,” he said.

An Afghan official says at least 20 people were killed during a complex attack Sunday against the office of the president’s running mate. Interior Ministry spokesman Nasrat Rahimi said on Monday around 50 other people were wounded in the attack against the Green Trend office in the capital Kabul. Several gunmen were holed up inside […]

The UN’s nuclear watchdog on Tuesday said it has identified three locations in Iran where the country possibly stored undeclared nuclear material or undertook nuclear-related activities without declaring it to international observers. The International Atomic Energy Agency (IAEA) said in a confidential report to member nations seen by The Associated Press that it has sent […]

Dozens of world leaders descended upon Jerusalem on Thursday for the largest-ever gathering focused on commemorating the Holocaust and combating modern-day anti-Semitism. Russian President Vladimir Putin, French President Emmanuel Macron, Britain’s Prince Charles, Vice President Mike Pence and the presidents of Germany, Italy and Austria were among the more than 40 dignitaries attending the World […]