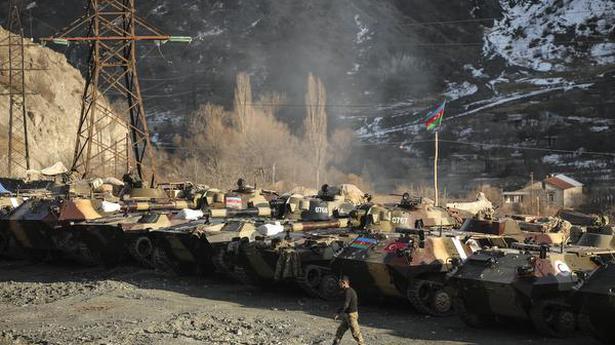 Up to 90,000 people fled the disputed Karabakh region during the fighting.

Azerbaijan said on Thursday that nearly 2,800 of its soldiers were killed in recent fighting over Nagorno-Karabakh, the first details it has released of military losses in weeks of clashes with Armenian forces.

The defence ministry in Baku said in a statement that “2,783 servicemen of the Azerbaijani armed forces were killed in the patriotic war,” adding that the identity of 103 troops is yet to be established though DNA analysis.

One hundred more Azerbaijani soldiers are missing, the statement said.

Azerbaijani soldiers “showed courage and heroism in the Great Patriotic War and inflicted crushing blows on the Armenian armed forces,” it said.

Yerevan had earlier announced that 2,317 Armenian troops died during the conflict, which also claimed the lives of at least 93 Azerbaijani and 50 Armenian civilians.

Up to 90,000 people — some 60% of the population — fled the disputed Karabakh region during the fighting.

Fresh clashes erupted between Armenia and Azerbaijan in late September, rekindling the Caucasus neighbours’ decades-long conflict over the ethnic Armenian enclave of Azerbaijan.

Fierce fighting persisted for six weeks despite efforts by France, Russia and the United States to broker ceasefires, before Armenia and Azerbaijan signed a Moscow-brokered peace deal on November 9.

The agreement was signed after Baku’s army overwhelmed separatist forces and threatened to advance on Karabakh’s main city Stepanakert.

It has sparked celebrations in Azerbaijan and fury in Armenia, where Prime Minister Nikol Pashinyan is facing mounting criticism for agreeing on the deal.

Under the agreement — which leaves Karabakh’s future political status in limbo — Armenia lost control of parts of the enclave as well as seven adjacent districts that it seized during the 1990s war.

Yerevan has thus lost territories it had hoped to use as a bargaining chip to pressure Baku towards the recognition of Karabakh’s independence.

Nearly 2,000 Russian peacekeepers have deployed between the two sides and along the Lachin corridor, a 60-kilometre (35-mile) route through the district that connects Stepanakert to Armenia.

Karabakh broke away from Baku in a war in the early 1990s that left some 30,000 people dead and displaced tens of thousands of Azerbaijanis.

Among those arrested on Saturday were 81-year-old activist and former lawmaker Martin Lee and democracy advocates Albert Ho, Lee Cheuk-yan and Au Nok-hin. Police also arrested media tycoon Jimmy Lai, who founded the local newspaper Apple Daily. The sweeping crackdown amid a coronavirus pandemic is based on charges of unlawful assembly stemming from huge rallies […]

A £1.6 billion fund the British government has said it is setting up as part of its response to the underlying challenges of the country that were manifested in the Brexit vote has become the centre of a new political storm in the U.K. While the Opposition Labour Party accused the government of attempting “Brexit […]