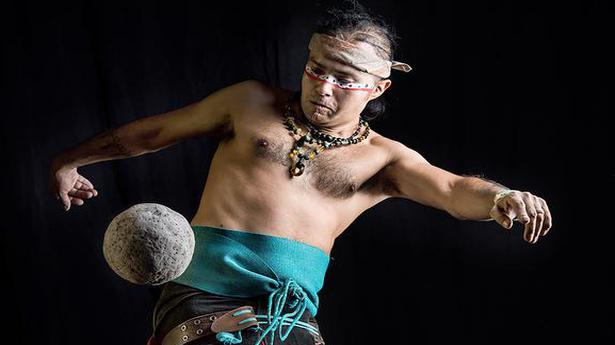 Now, a group of young players are bringing the game back to life for the first time in Mexico City — without the human sacrifice — at the site of an old garbage dump.

The players proudly tie thick leather belts around their waists as they prepare to play ulama, as the game is known in the Nahuatl language: a mixture of sport, ritual and ceremony whose promoters are now using it to help at-risk youth in a downtrodden neighbourhood on the Mexican capital’s north side.

Pre-Columbian ballgames dating back thousands of years were once played across a broad swathe of the Americas by civilisations including the Mayas, Incas and Aztecs, and they have been revived elsewhere in Mexico and the region in modern times.

But this is the first time in half a millennium that there has been a place in Mexico City, once the capital of the Aztec empire, to play the game known in Spanish as juego de pelota.

“The game had been forgotten,” says Emmanuel Kakalotl, who coaches players at the cultural center where the new ulama court was built.

Wearing their traditional belts and loincloths, his players hit the nearly four-kilogram rubber ball with their hips, trying to send it through a vertical stone ring six metres (20 feet) high.

The game is played by teams of one to seven players.

Centuries ago, they were all men. But here, the game is open to women, too.

“We’re women-warriors at heart, because it isn’t easy. Not just anyone can play this sport. It takes a lot of practice, and your body takes a beating,” says Beatriz Campos, 25.

In pre-conquest Mexico, ulama was played in various contexts, including fertility rituals and wars.

The court was a highly symbolic realm, representing the duality of the universe. But the outcome was very real for the players, who risked being sacrificed, usually by decapitation.

The tradition varied over the centuries, researchers say: sometimes, it was the winners who were sacrificed, which was considered an honour. At other points, it was the losers.

“The game and its religious connotations changed over time. First-hand accounts from the post-classical period (900 to 1521) suggest that by that stage, it was the loser who was sacrificed,” says Annick Daneels, an expert on pre-Columbian ballgames at Mexico’s largest university, UNAM.

The ritual died out soon after the Catholic conquistadors arrived, in 1519.

“When the Spanish arrived, because of the political and religious aspects of the ballgame, it was probably one of the first things they banned,” says Ms.Daneels, who is Belgian.

It was never played again in what had been the Aztec capital, Tenochtitlan — until the cultural centre, looking for projects to revive the blighted site of an old garbage dump in the Azcapotzalco neighborhood, decided to build an ulama court there.

Players take the game very seriously. No alcohol or smoking is allowed at the court. For some, ulama is an escape from drug addiction or a history of crime.

“There are some basic fundamentals in the indigenous worldview: the unity of our physical, intellectual, emotional and energetic beings. A lot of times, when people lose their way, it’s because they don’t have that unity. We help find it again,” says Lia Membrillo, coordinator at the cultural centre, which is operated by the city government.

Giovanni Navarro, 30, takes issue with the idea that he and his fellow players are “rescuing” ulama.

“Actually, the game is rescuing us,” he says.

The United States on Wednesday circulated a draft resolution to the UN Security Council that would blacklist the leader of a Pakistan-based Islamist group as a terrorist, setting up a potential clash with China over the move. China earlier this month put on hold a request to put Masood Azhar, leader of Jaish-e-Mohammad (JeM) on […]