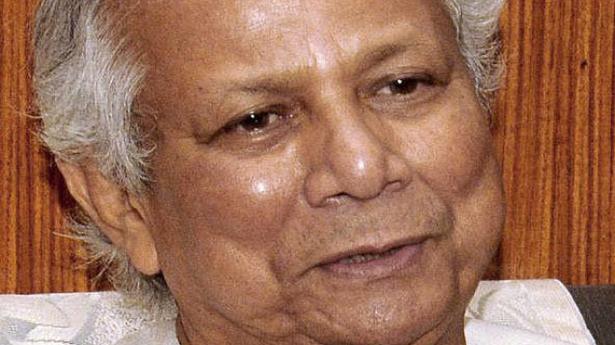 A Dhaka court on Wednesday issued an arrest warrant against Nobel laureate and Grameen Bank founder Muhammad Yunus after he failed to appear in person before it in a case of alleged labour law violation.

“Though the two senior officials of the Grameen Communications appeared before the court, Yunus failed to turn up, following which the chairman of the court, Rohibul Islam, issued the arrest warrant against him,” a court official said.

The court granted bail to the two company officials who appeared before it, he said.

Three former employees of the Grameen Communications have filed criminal cases against the company management after they were sacked in June for their role in the formation of trade union at their workplace.

The trio filed three separate cases for transferring them as part of harassment, issuing threats and subsequently sacking them for forming the trade union.

Mr. Yunus courted controversy in 2015 also when Bangladesh’s revenue authorities summoned him over non-payment of over $1.51 million taxes.

The 79-year-old economist has been at odds with Prime Minister Sheikh Hasina since 2007 when he made a brief foray into the country’s violent and polarised politics dominated by her family and her arch-rival Khaleda Zia.

Mr. Yunus was removed in 2011 as head of the micro-lender Grameen Bank that he founded, a move widely seen as orchestrated by Ms. Hasina.

Mr. Yunus set up the Grameen Bank in 1983 to make collateral-free micro-loans to rural and mostly women entrepreneurs. Its record in helping to reduce poverty earned him global fame and a Nobel Peace Prize.

But Ms. Hasina has accused Mr. Yunus of “sucking blood” from the poor. In 2013, the government ordered legal action against him on charges of, what it said, was “tax exemption without following due procedure”, misuse of power and violating foreign travel regulations.

A new Dutch law has come into force banning face-covering clothing including the burqa and niqab worn by conservative Muslim women on public transport, in government buildings and at health and education institutions. The Netherlands, long seen as a bastion of tolerance and religious freedom, is the latest European country to introduce such a ban […]

President Moon Jae-in urged South Koreans not to give in to fear on Thursday, as the government prepared to evacuate the first of about 700 citizens from the epicentre of a new coronavirus epidemic in China’s central city of Wuhan. The first of up to four planned flights to Wuhan had been expected to depart […]