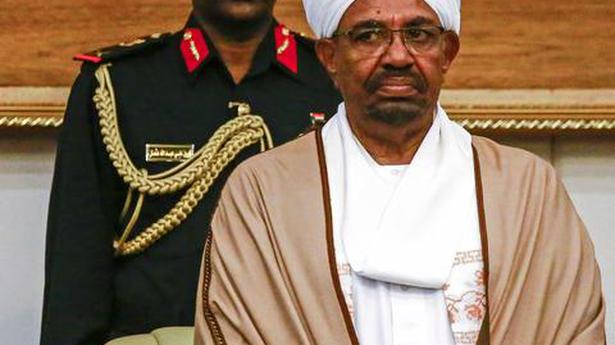 Sudan’s military ousted Mr. Bashir after weeks of mass protests that climaxed in a sit-in outside the Defence Ministry compound.

Protests are continuing and their leaders say the unrest will not cease until the ruling Transitional Military Council (TMC) hands power to a civilian-led authority ahead of elections. In initial moves to tackle graft, the TMC ordered the central bank to review financial transfers since April 1 and to seize “suspect” funds, state news agency SUNA said on Wednesday.

Mr. Bashir, 75, had been detained under heavy guard in the presidential residence inside the compound that also houses the Defence Ministry, before being transferred to Kobar prison late on Tuesday, the family sources said. He was being held in solitary confinement at Kobar, a prison source said.

Punjab man stabbed to death in Melbourne by friend after argument

Pakistan on Thursday pledged to contribute $3 million to the SAARC Coronavirus Emergency Fund proposed by Prime Minister Narendra Modi with an initial offer of $10 million from India to help combat the fast-spreading Covid-19 pandemic in the region. The Foreign Office in a statement said Pakistan’s perspective on the utilisation of fund was conveyed […]

Across Baghdad, a moment of respite and guarded hope

Baghdad’s main commercial district has seen more bombings than its residents can count. Death visited almost daily during times of war most horrifically, a 2015 suicide bombing that ripped through two shopping malls, killing over 300 people. But over the past year or so, the residents of Karrada have felt more normal than they have […]