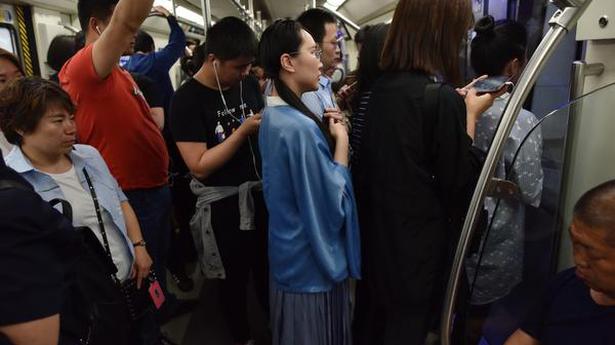 Beijing will use facial recognition tools to speed up security checks in the city’s overcrowded metro, using a ‘credit system’ to sort passengers into different channels, State-run media reported on October 30.

Long queues and commuters arguing with staff over slow security procedures are common sites during rush hour in the metro system of the 20 million-strong metropolis.

The city plans to install cameras that will scan the faces of passengers as they enter a subway station and sort them into different security channels, said Zhan Minghui, director of the Beijing Rail Traffic Control Centre. He said the plan involves creating a “passenger credit system”.

Those who receive “abnormal feedback” after their faces are scanned will be subjected to extra checks.

Mr. Zhan did not offer details on the criteria used to sort passengers or what could trigger that type of feedback.

“The technique aims to improve the efficiency of security checks and includes both body checks and luggage screening when large numbers of passengers enter the station,” he told an urban transportation forum in Beijing on October 29.

The Beijing subway in May said it has started “deducting credit points” from passengers who eat in railway carriages.

The city’s subway system currently handles over 12 million trips on a work day and the number is expected to increase to 17 million trips by 2022.

Mr. Zhan did not offer a timetable for rolling out the technology.

Facial recognition is gaining traction across China, where it is being used for everything from supermarket checkouts to surveillance.

While researchers have warned of the privacy risks associated with gathering facial recognition data, consumers have widely embraced the technology.

The Universal Studios amusement park under construction in Beijing recently said it will admit visitors without a ticket — thanks to cameras that will scan their faces to determine if they paid for entry.

Hong Kong anti-government protesters are increasingly focusing their anger on mainland Chinese businesses and those with pro-Beijing links, daubing graffiti on store fronts and vandalising outlets in the heart of the financial centre. Protesters took aim at some of China’s largest banks at the weekend, spray-painting anti-China slogans on shuttered branches and trashing ATM machines […]

As Washington plunges into impeachment, Attorney General William Barr finds himself engulfed in the political firestorm, facing questions about his role in President Donald Trump’s outreach to Ukraine and the administration’s attempts to keep a whistleblower complaint from Congress. Mr. Trump repeatedly told Ukraine’s president in a telephone call that Mr. Barr and Mr. Trump […]

China reported 17 new cases of the mysterious SARS-like virus on Sunday, including three in a severe condition, heightening fears ahead of China’s Lunar New Year holiday when hundreds of millions of people move around the country. The virus — a new strain of coronavirus that humans can contract — has caused alarm because of […]