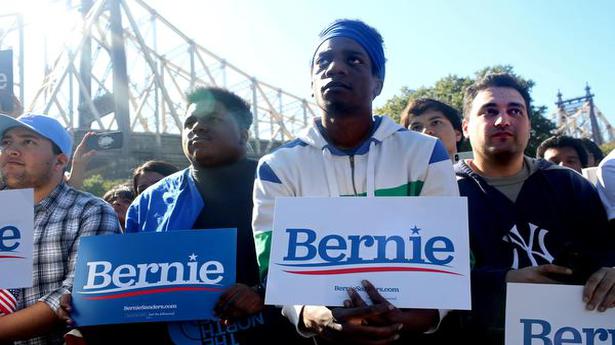 U.S. presidential hopeful Bernie Sanders returned to the campaign trail in New York City on Saturday, three weeks after suffering a heart attack, and pledged to resume at full throttle his battle against the business and political establishment, including members of his own Democratic Party.

Mr. Sanders, one of 19 Democrats fighting to take on Republican President Donald Trump at the polls in November 2020 was introduced by U.S. Representative Alexandria Ocasio-Cortez, one of the leaders of the party’s progressives and a frequent target of Trump’s attacks.

The congresswoman announced her support to Mr. Sanders’ campaign as his campaign battled to overcome the health scare and a surge in support for Elizabeth Warren, a U.S. Senator from Massachusetts.

Mr. Sanders, 78, the oldest candidate in the crowded Democratic field, has bounced back rapidly since the Oct. 1 heart attack that threatened to derail his campaign.

But Mr. Sanders, a U.S Senator from Vermont, was already running third behind Ms. Warren and former Vice President Joe Biden in most national polls, although Mr. Sanders raised more money for his campaign in the last quarter than any other Democrat.

The rally was Mr. Sanders’ largest of his 2020 campaign so far, with 25,872 people attending, his campaign said, citing a count by an outside company that managed the event, which Reuters was unable to independently verify.

The number would make the rally larger than one held in the city by Ms. Warren last month, Warren’s largest of the campaign.

“His supporters are so much more passionate” than other Democratic candidates, said Christina Martin, 29, from Manhattan, who came to the rally with her mother, also a Sanders supporter and a breast cancer survivor.

Both said Mr. Sanders’ proposal for government-run health care was his main draw, and credited him with focusing the Democratic Party on the issue.

“He moved the party so much in the past four years,” said Martin. “We wouldnt be where we are without him. We wouldnt be talking about Medicare for All.”

The backing of Ocasio-Cortez is expected to boost Sanders in his efforts to fight off Ms. Warren. The filmmaker Michael Moore also spoke to endorse Sanders’ campaign.

Ocasio-Cortez, better known by her initials AOC, was welcomed with chants of “Green New Deal”, a reference to her proposal for a transition to renewable energy sources that has been taken up by Mr. Sanders as part of his policy platform.

The New York native went from working as a poorly paid waitress as recently as last year to sitting in Congress, she said, crediting Sanders for her own political awakening and shaking up U.S. politics with his primary challenge of eventual nominee Hillary Clinton in 2016.

“It wasn’t until I heard of a man by the name of Bernie Sanders that I began to question and assert and recognize my inherent value as a human being that deserves healthcare, housing, education and a living wage,” she told the rally.

Ocasio-Cortez volunteered as an organizer for Sanders’ 2016 campaign before winning her own election to the House of Representatives last year representing a district close to the site of the rally.

Mr. Sanders, after taking the stage to AC/DC’s “Back in Black” song, launched into a wide ranging critique of an unequal U.S. society beset by what he described as the corrupting influence of corporate power.

He noted the park he was speaking in sat beside the country’s largest public housing project, Queensbridge Houses, which he said was in urgent need of repair, while just across the East River lay the shining skyscrapers of Manhattan, where banks and multinational corporations are headquartered.

Sanders said he would invest in public housing and education and write off medical debts, but warned that elites in politics, business and the media were working against his plans to address inequality.

“They want us to believe that the only reality that we can live under is the status quo, that real change is impossible,” said Sanders, also slamming moderate Democrats who questioned the affordability of his proposals during a debate in Ohio on Tuesday night.

He would raise taxes on the rich to pay for his plans, Sanders said, including through a wealth tax on those with a net worth of more than $32 million.

David Cobb, 61, said that, like many at the rally, he was drawn to Sanders’ by his plans for healthcare reform.

Cobb had one arm in a sling from recent shoulder surgery and clutched a Bernie placard under the other arm. He was accumulating thousands of dollars of medical debt, he said, despite having some coverage through the existing Medicare plan for older Americans and a health maintenance organization.

Its corrupt,” said Cobb. “Were the only industrialized country in the world thats like this.

Coronavirus outbreak: China toll rises to 41, 11 under watch in hospitals in Kerala, Mumbai and Hyderabad

The death toll due to the new coronavirus outbreak mounted to 41 in China, a news agency quoted the Chinese government as saying on early Saturday. The deadly virus spread has now infected more than 1,000 people globally, highlighting the challenges for health authorities around the world working to prevent a global pandemic. The Health […]

Fearing Britain could drop out of the European Union without a deal by design or default, one British lawmaker has threatened to deny Prime Minister Boris Johnson his day of Brexit glory by delaying a vote on a last-minute divorce deal. Oliver Letwin, 63, is a former cabinet minister with a reputation as an unofficial […]

A third of the world’s nearly 700 million children under five years old are undernourished or overweight and face lifelong health problems as a consequence, according to a grim UN assessment of childhood nutrition released on October 15. “If children eat poorly, they live poorly,” said UNICEF Executive Director Henrietta Fore, unveiling the Fund’s first […]