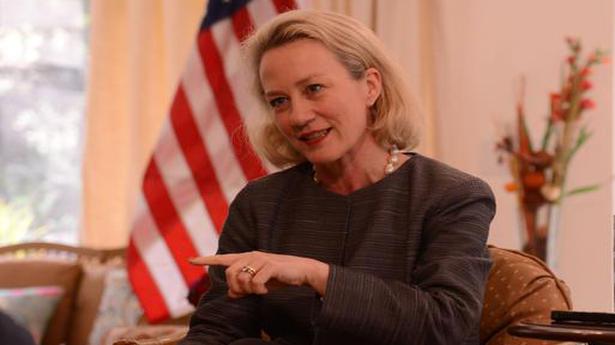 If India and the U.S. cannot achieve a modest trade deal with U.S. President Donald Trump visiting India, it would be a “big setback”, the U.S.’s top diplomat for South and Central Asia, Alice Wells said. U.S. Trade Representative (USTR) Robert Lighthizer cancelling his trip this week to India cast doubt on whether a mini trade deal could be completed before the February 24 visit of Mr Trump. Mr. Lighthizer will possibly visit along with Mr. Trump, The Hindu had reported, leaving open the possibility that a modest agreement could be finalised.

Ms. Wells said that if a “tiny phase 1 trade deal” with the U.S. President visiting India could not be achieved, it would be a “big setback”. She was speaking to reporters on the sidelines of a United States India Business Council (USIBC) welcome reception for Indian Ambassador Taranjit Singh Sandhu on February 13 evening.

“They continue to try and finalize an agreement,” Ms. Wells said, adding that she however said that she could not speak for the Office of USTR and is not privy to the details of the negotiation. She said the U.S. would like to have “a lot more ambitions” for making India part of the global supply chain but that the U.S. experience in negotiating trade was “very painful” and that the policy directions in India – including in the recent Union Budget as well as the e-commerce policy ( a draft was introduced in early 2019) were of concern.

Ms. Wells herself will not be accompanying Mr. Trump to India and neither will Secretary of State Mike Pompeo. They will stay behind in Washington for a Chief of Missions conference. US envoy to India Kenneth Juster will represent the State Department in India during the presidential visit.

In response to a question from The Hindu on whether Mr. Trump would offer to mediate between India and Pakistan regarding the Kashmir issue , Ms. Wells said the U.S. President is aware that India is not interested in mediation but that Mr. Trump is “genuinely interested” in how India and Pakistan are managing tensions and “concerned” about the tensions. Mr. Trump has , more than once, said that he has good relationships with both Prime Minister Narendra Modi and Pakistan Prime Minister Imran Khan. He has also repeatedly offered his mediation services.

“If we can help, we certainly will be helping,” Mr. Trump had said at the World Economic Forum in January, in the presence of Mr. Khan.

“We think it’s time,” Ms. Wells said on the question of Australia participating in the U.S.-India-Japan naval wargames, the Malabar Exercise. Concerns about the message Australian participation would send China (Australia is part of the ‘Quad’ group with India, the U.S. and Japan) have, historically, made India reluctant to permit Australia’s participation in the exercises.

Ms. Wells said it would be a “good gesture” to even have Australia as an observer, adding that she was “very struck” by how positive the India Australia relationship is right now.

The new coronavirus, SARS-CoV-2, has infected hundreds of people in Chinese prisons, authorities said on Friday, contributing to a jump in reported cases beyond the epidemic’s epicentre in Hubei province, including 100 more in South Korea. The 234 infections among prisoners outside Hubei ended 16 straight days of declines in new mainland cases excluding that […]

A British judge sentenced WikiLeaks founder Julian Assange on Wednesday to 50 weeks in prison for skipping bail seven years ago and holing up in the Ecuadorian embassy. Judge Deborah Taylor said it was hard to imagine a more serious version of the offense as she gave the 47-year-old hacker a sentence close to the […]