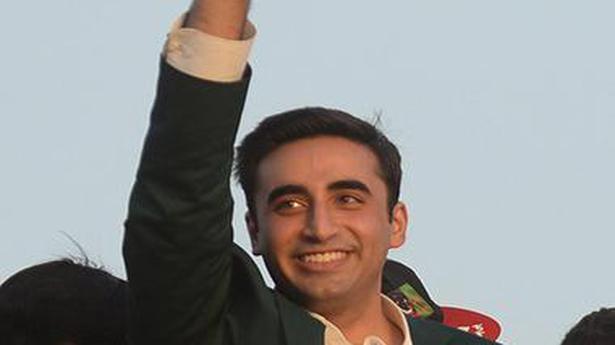 “The government has responded to my demand to sack Ministers associated with banned outfits by declaring me anti-state, issuing death threats & NAB notices. None of this deters us from our principle[d] stand; form joint NSC parliamentary committee & act against banned outfits,” tweeted Bilawal Bhutto-Zardari, chairman of the Pakistan Peoples Party (PPP), on Tuesday.

Last week, Mr. Bhutto-Zardari had demanded the removal of three federal Ministers for their links with proscribed organisations. He had not named the three Ministers but everyone had guessed their names — Finance Minister Asad Umar, Minister of State for Interior Shehryar Afridi and Railways Minister Sheikh Rasheed Ahmad. In a series of tweets on Monday, Mr. Bhutto-Zardari confirmed these names by tweeting out news stories of these three Ministers hobnobbing with leaders of banned outfits.

On March 16, Mr. Rasheed tweeted: Log kehte hain Bilawal bacha hai, Bilawal agar bach kar khelay toh acha hai warna siyaasat mein maara jaayega (People say that Bilawal is a child. If he plays cautiously, it will be good, otherwise he can die in politics — or die politically.) The PPP construed this tweet as a serious death threat as it believed that Mr. Rasheed has links with banned outfits.

There has been a war of words ever since the PPP chairman delivered a hard-hitting speech in the National Assembly on March 6. He appreciated the Opposition for showing a united front to the world after the Indian aggression post-Pulwama. He said: “There was no petty politicking… none of the Opposition members dared to declare Imran Khan a security risk for trying to make peace overtures to India.” Mr. Bhutto-Zardari also poked fun at the resolution to nominate Mr. Khan for the Nobel Peace Prize.

After that, he spoke resolutely about terrorism. “We don’t need to fight terrorism, extremism, banned organisations because the world wants us to, because we are under international pressure, because we are under India’s pressure. As the Pakistan Peoples Party has been saying from the outset when most members of this House were in denial about the threats of extremism and terrorism, we have to combat this mindset for the future of our coming generation.”

Some experts believe that the harsh — but factual — criticism of the state’s policies has irked the government.

“If this is how the PTI government wants to respond to facts, then how will it prove to the international community that it is serious in taking substantive action against banned organisations?,” asked PPP spokesperson Mustafa Nawaz Khokhar. He added that Prime Minister Khan himself has said on several occasions that he will not allow militant organisations to operate from Pakistani soil. Why, then, was his government being so defensive when the links of his Cabinet Ministers are pointed out, he asked? “We lost our leader Benazir Bhutto to terrorism. The PPP leadership is still taking a hard stand on terrorists despite security risks. The government must also show how sincere and serious they are when it comes to fighting terrorism and taking action against militant outfits,” he said.

The Trump administration has a very clear position on Pakistan and wants Islamabad to take immediate, sustained and irreversible action on reining in terror groups and to ensure that its soil is not used for terrorism, External Affairs Minister S Jaishankar has said, a day after the conclusion of the second India-US 2+2 dialogue. US […]

Taliban fighters killed eight election commission employees on Saturday night inside a district centre in Afghanistan’s southern province of Kandahar, officials said. The employees of the Independent Election Commission were stationed at the government office in Maruf district to register voters when fighters of the hard line Islamist group launched an attack. Taliban has claimed […]