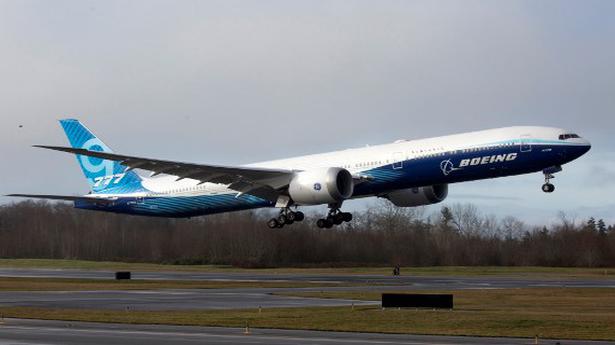 Boeing’s new long-haul 777X airliner made its first flight on Saturday, a step forward for the company whose broader prospects remain clouded by the 737 MAX crisis.

The plane took off from a rain-slicked runway a few minutes after 10:00 am local time (1800 GMT), at Paine Field in Everett, Washington, home to Boeing’s manufacturing site in the northwestern United States. Weather conditions had already twice delayed the inaugural take-off of the plane, which sports blue and white company colours and is emblazoned with the Boeing name.

High winds led to its postponement on Friday, and the company blamed weather for an earlier delay on Thursday, which was rainy.

“Yes!” shouted Boeing spokesman Josh Green as the plane’s wheels finally lifted off the tarmac as its two powerful engines sent up huge clouds of mist. Minutes earlier, the pilots had deployed the plane’s winglets — folding wing tips — designed to improve the craft’s fuel efficiency and make it possible for the plane, with the widest wing span ever from Boeing, to be accommodated at more airports.

The 777X quickly disappeared into the clouds; after a flight lasting several hours, it was to land later at Boeing Field in a Seattle suburb, some 30 miles (50km) to the south. The 777X was originally to take to the skies for the first time in mid-2019, but that was postponed due to problems with the new engine, manufactured by General Electric, and difficulties with the wings and software.

Saturday’s flight was to be the first of a series of in-flight tests. If they go well, Boeing will officially file for approval from the Federal Aviation Administration (FAA).

With Boeing facing a crisis over its top-selling 737 MAX following two deadly crashes, the 777X is supposed to compete in the long-haul aircraft market with the A350 made by rival European aircraft manufacturer Airbus. Major airlines including Emirates, Lufthansa, Cathay Pacific, Singapore Airlines and Qatar Airways have placed some 340 orders for the 777X.

The first deliveries of the new model, with maximum capacities of 384 to 426 passengers depending on the configuration, are not expected before early 2021, instead of mid-2020 as initially planned. The aircraft encountered significant problems during pressurization tests in September.

Boeing’s business has also been weakened by a lack of firm orders from Chinese airlines for its 787 Dreamliner, which is expected to see production cuts. The 777X has a range of 16,200 to 13,500 km depending on its configuration and the number of passengers aboard, according to the Boeing website. It is also extremely fuel-efficient, an important consideration at a time when passengers are increasingly concerned about carbon emissions.

Its list price is between $410 million to $442 million, though customers often negotiate discounts. U.S. Air Safety Regulators could clear the 737 MAX to return to service before mid-year, a person close to the process said Friday. The plane has been grounded since March following two deadly crashes, in Ethiopia and Indonesia. On Tuesday, Boeing announced that it did not expect to win regulatory approval until mid-2020.

Boeing suspended production of the MAX this month but Chief Executive David Calhoun said this week the company plans to begin ramping up production of the model in anticipation of winning regulatory approval to restart service. He began as CEO earlier in January following the ouster of Dennis Muilenburg, who tenure was rocked by the MAX crisis which led to deteriorating relations between the company and the FAA.

Mr. Calhoun aims to turn the company around, and has highlighted restoring Boeing’s reputation with regulators, customers and other stakeholders as an imperative.

China no longer top trading partner of US

Swiss-Dutch company Allseas said it had suspended work on building a major Russia-to-Germany natural gas pipeline in order to avoid U.S. sanctions contained in legislation signed by President Donald Trump on Friday. The move throws into doubt the completion date of the $11 billion project that Moscow had said would be ready in months, jeopardising […]

Democratic presidential candidates expressed outrage Saturday that mass shootings have become chillingly common nationwide and blamed the National Rifle Association (NRA) and its congressional allies after a gunman opened fire at a shopping area near the Texas-Mexico border. “It’s not just today, it has happened several times this week. It’s happened here in Las Vegas […]