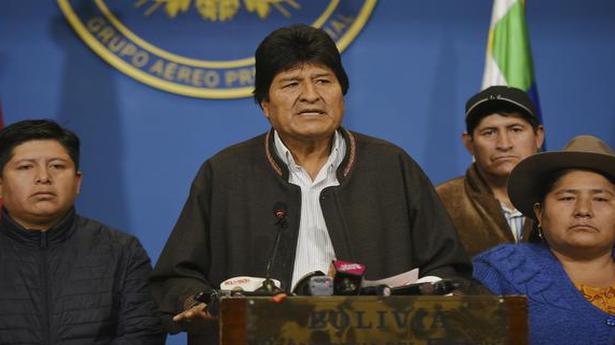 Bolivian President Evo Morales said on November 10 he would resign after the military called on him to step down and allies tumbled away amid a fierce backlash over a disputed election that has roiled the South American nation.

Mr. Morales, the country’s leader for nearly 14 years, said in televised comments that he would submit his resignation letter to help restore stability, though he aimed barbs at what he called a “civic coup.”

The head of Bolivia’s armed forces earlier on November 10 said the military had asked Mr. Morales to step down after weeks of protests over the October 20 presidential election, which was won by Mr. Morales.

“We suggest the President of the State renounce his presidential mandate, allowing peace to be restored and the stability maintained for the good of our Bolivia,” said General Williams Kaliman, the commander of Bolivia’s armed forces.

“Likewise, we ask the Bolivian people and mobilized sectors to shed attitudes of violence and disorder among brothers so as not to stain our families with blood, pain and mourning.”

Earlier on November 10, Mr. Morales had agreed to hold new elections after a report from the Organization of American States (OAS), which conducted an audit of the October 20 vote, revealed serious irregularities in the election.

The OAS report said the October vote should be annulled after it had found “clear manipulations” of the voting system that called into question Mr. Morales’ win, with a lead of just over 10 points over main rival Carlos Mesa.

‘Today we won a battle’

The election turmoil threatens to topple Mr. Morales, a survivor of Latin America’s leftist “pink tide” two decades ago, and could ripple around the region at a time when left-leaning leaders have returned to power in Mexico and Argentina.

“This is important not only for the well-being of the Bolivian people, but also for the stability of Argentina, Chile, Peru, Paraguay and Brazil,” said Juan Cruz Diaz, managing director of risk advisory Cefeidas Group.

“(Mr. Morales’) legacy will be compromised and the region will suffer another impact with consequences well beyond Bolivia.”

Mr. Morales, speaking at an earlier news conference, tried to placate critics by saying he would replace the country’s electoral body for the new vote, though his opponents – already angry that he ran in defiance of term limits – were not assuaged.

Luis Fernando Camacho, a civic leader from the eastern city of Santa Cruz who has become a symbol of the opposition, said the OAS report clearly demonstrated election fraud. He reiterated his call for Mr. Morales to resign.

“Today we won a battle,” Camacho told a crowd of cheering supporters in the capital, though he added more time was needed to repair the constitutional order and democracy. “Only when we can be sure that democracy is solid, then will we go back home.”

U.S. Secretary of State Mike Pompeo had welcomed the call for a new vote to “ensure free and fair elections.”

As the fall-out from the audit report swept across Bolivia, there were signs that Mr. Morales’ support was waning fast.

Several of his allies resigned, including Mining Minister Cesar Navarro and Chamber of Deputies President Victor Borda, who belongs to Mr. Morales’ party. They both cited fear for the safety of their families as the reason for stepping down.

Juan Carlos Huarachi, leader of the Bolivian Workers’ Center, a powerful pro-government union, said Mr. Morales should stand down if that would help end recent violence.

“If it means resigning to bring peace to the Bolivia people, then Mr. President we should do it,” he said.

In recent days police forces were also seen joining anti-government protests, while the military said it would not ”confront the people” over the issue after a weeks-long standoff.

The attorney general’s office also announced it had ordered an investigation with the aim of prosecuting the members of the electoral body and others responsible for the irregularities.

When questioned about whether he would be a candidate in the new election, Mr. Morales told a local radio station “candidacies must be secondary; what comes first is to pacify Bolivia,” adding he had a constitutional duty to finish his term.

Mr. Mesa said Mr. Morales and Vice President Alvaro Garcia Linera should not preside over the electoral process or be candidates.

“If you have an iota of patriotism, you should step aside,” Mr. Mesa said in a news conference.

Mr. Morales, who came to power in 2006 as Bolivia’s first indigenous leader, had defended his election win but said he would adhere to the findings of the OAS audit.

“The manipulations to the computer systems are of such magnitude that they must be deeply investigated by the Bolivian State to get to the bottom of and assign responsibility in this serious case,” the preliminary OAS report said.

“The first round of the elections held on October 20 must be annulled and the electoral process must begin again,” the OAS added in a separate statement.

Voting should take place as soon as conditions are in place to guarantee it being able to go ahead, including a newly composed electoral body, the OAS said.

The OAS added that it was statistically unlikely that Mr. Morales had secured the 10-percentage-point margin of victory needed to win outright.

Local media reported shots were fired at vehicles carrying a group of miners on their way to La Paz from the southern mining region of Potosi earlier on November 10, causing several injuries. The official government human rights body issued a statement condemning the attack.

The National Accountability Bureau’s (NAB) regional board, under the chairmanship of its Director General Shahzad Saleem, convened here on Friday. Source: thehindu.com Related

Dozens of cars in an Israeli Arab village were vandalised overnight, police said on Tuesday, with slogans sprayed on a mosque indicating the involvement of Jewish extremists. The slogans “Jews awaken” and “Stop assimilating” were scrawled on a mosque and another building in Jish, a small village in the Galilee just south of Israel’s border […]

Donald Trump in India live updates | Hope the right decision for the people will be made, says Trump on CAA