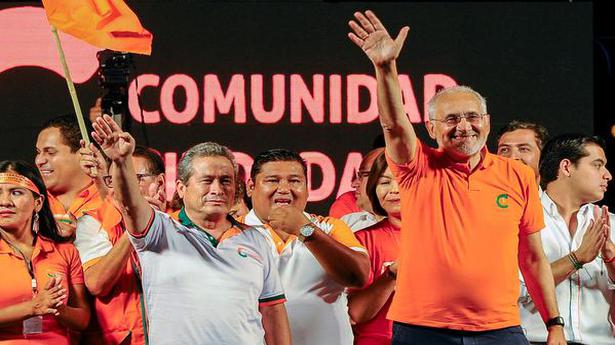 South America’s longest-serving leader is seeking an unprecedented fourth term in Bolivian elections on Sunday, but polls suggest Evo Morales is in the tightest race of his career.

The 59-year-old leftist is favored to win the first round vote, but he’s likely to be forced into a December runoff where he could be vulnerable to a united opposition.

The son of Aymara Indian shepherds has also been credited for battling racial inequalities.

Many Bolivians, such as Celestino Aguirre, a 64-year-old vendor, still identify with Mr. Morales, saying people shouldn’t criticize him so much. “It’s not against Evo, it’s against me, against the poor people, against the humble.”

But Mr. Morales also has faced growing dissatisfaction even among his indigenous supporters. Some are frustrated by corruption scandals linked to his administration though not Mr. Morales himself and many by his refusal to accept a referendum on limiting presidential terms. While Bolivians voted to maintain term limits in 2016, the country’s top court seen by critics as friendly to the president ruled that limits would violate Morales’ political rights as a citizen.

“I’m thinking of a real change because I think that Evo Morales has done what he had to do and should leave by the front door,” said Nicolŕs Choque, a 27-year-old car washer.

Mauricio Parra (40), who administers a building in downtown La Paz, said he voted for Mr. Morales in 2006 as a reaction against previous center-right governments.

“He did very well those four years. … (But) in his second term there were problems of corruption, drug trafficking, nepotism and other strange things” that led Parra to vote against repealing term limits in the 2016 referendum. “He hasn’t respected that. That is the principle reason that I’m not going to vote for Evo Morales.”

An Oct. 4-6 poll by the San Andres Higher University and other institutions showed Mr. Morales apparently leading Mr. Mesa, 32% to 27% heading into the first round of voting, with the rest split among other candidates.

That would set up a runoff, and the poll showed Mr. Morales and Mr. Mesa practically tied at just under 36% each in a two-way race with the rest of those surveyed saying they were undecided, would cast a null ballot or declining to state a preference. The poll surveyed 14,420 people and the margin of error was 2.82 percentage points.

Bolivians will also elect all of the 166 congressional seats. Polls project that no party would have a majority in Congress, which could lead to an impasse for the upcoming administration.

Explainer: Why are Boeing 737 flights being grounded?

In the aftermath of the deadly Ethiopian Airlines crash which killed all 157 people aboard, numerous countries, including India, have grounded the Boeing 737 MAX 8 airline or banned it from their airspace. That the accident comes barely five months after the similar Lion Air crash in Indonesia involving the same aircraft model has only […]

PM Modi not in ‘good mood’ over border row with China, says Trump

Apple Inc caught up with hardware rivals on Tuesday by revealing a triple-camera iPhone, and it rolled out a streaming TV service priced at $5 a month, undercutting Disney and Netflix. The announcements came at the company’s biggest marketing event, where it unveils its top products for the year ahead, and showcased an aggressive Apple […]