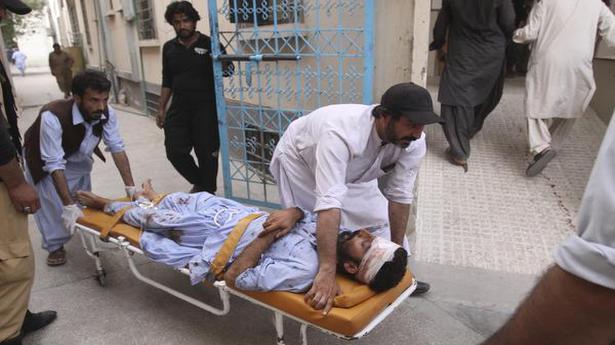 A powerful bomb went off at an open-air market in the southwestern city of Quetta on Friday, killing at least 16 people and wounding several others, police and hospital officials said.

“Emergency has been declared at hospitals and it seems people from the Hazara community were the target,” he said.

No group has immediately claimed responsibility for the attack but outlawed Sunni extremist groups have claimed similar attacks in the past. Sunni extremists view Shiites as apostates deserving of death.

Jam Kamal Khan, the chief minister of Baluchistan province, condemned the bombing, saying “the enemy of humanity is behind this act of terrorism.” He said he ordered authorities to provide best possible treatment to those wounded.

Quetta is the capital of Baluchistan, which also is the scene of a low-level insurgency by separatists demanding more autonomy and a greater share in the region’s natural resources such as gas and oil.

The mother of France’s youngest coronavirus (COVID-19) victim has spoken of the “unbearable” loss of her 16-year-old daughter, as the country reported its highest daily toll from the pandemic. India coronavirus lockdown, day 3 live updates | State Helpline numbers French authorities said on Thursday that 365 people had been killed by COVID-19 over the […]

Defiant in the face of a historic rebuke, President Donald Trump rallied supporters in Michigan on Wednesday night as the House voted to impeach him, declaring, “It doesn’t really feel like we’re being impeached.” Mr. Trump took the stage just minutes before he became the third President in U.S. history to be impeached by the […]

A fast-moving scrub fire threatened orchards, oil fields and homes while displacing thousands of residents in Southern California on Friday, even as diminishing winds helped fire crews tame a rash of wildfires elsewhere across the state. The latest in a spate of conflagrations that have kept California firefighters on the go for weeks roared to […]