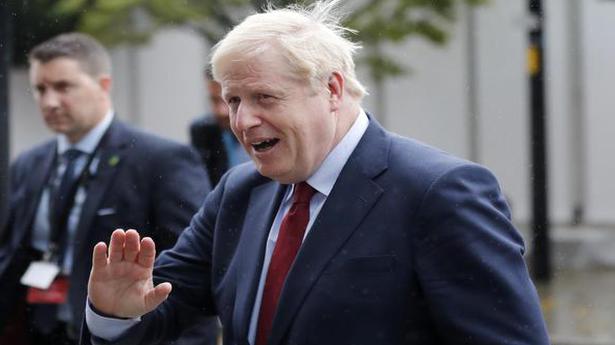 British Prime Minister Boris Johnson said on Tuesday that “this is the moment when the rubber hits the road,” as his government prepared at last to make firm proposals for a new divorce deal with the European Union.

Britain is due to leave the 28-nation bloc at the end of this month, and EU leaders are growing impatient with the U.K.’s failure to set out detailed plans for maintaining an open border between Northern Ireland and Ireland, the key sticking point to a deal.

The U.K. plans to send them to Brussels within days of the governing Conservative Party conference ending in Manchester, northern England, on Wednesday. Mr. Johnson said details would be disclosed “very soon.”

Mr. Johnson says Britain will leave the EU on the scheduled October 31 date, with or without a deal on the terms. An agreement between the EU and his predecessor, Theresa May, was rejected three times by the U.K. Parliament, largely because of opposition to the “backstop,” an insurance policy designed to ensure there is no return to customs posts or other infrastructure on the Irish border.

An open border underpins both the local economy and Northern Ireland’s peace process.

U.K. Brexit supporters oppose the backstop because it would keep the U.K. tightly bound to EU trade rules in order to avoid customs checks limiting its ability to strike new trade deals around the world.

“There is no point in doing Brexit if you stay locked in the customs union and locked in the single market with no say,” Mr. Johnson told the BBC.

Ireland’s Deputy Prime Minister also rejected an idea floated in preliminary U.K. papers for customs posts a few miles away from the border.

Simon Coveney called the idea a “non-starter” and tweeted: “Time the EU had a serious proposal from the UK Govt if a Brexit deal is to be achievable in October. NI and IRE deserves better!”

Mr. Johnson said the idea was not going to be included in the U.K.’s submission. “That’s not what we’re proposing at all,” he said.

With nearly 80% of the votes counted, she received 344,541 votes. Source: thehindu.com Related

The bid to review the 18th Amendment