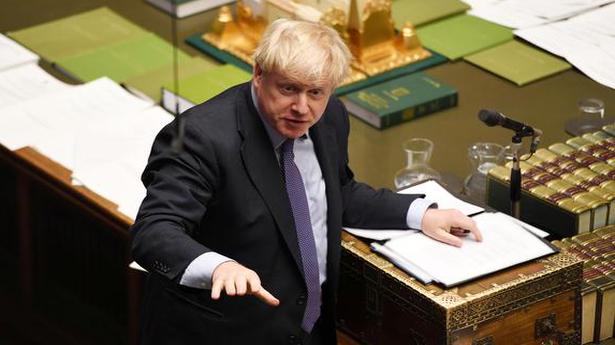 Prime Minister Boris Johnson said on Tuesday the government would pause legislation to ratify its Brexit deal with the European Union while the bloc decides whether to offer a delay to Britain’s planned Oct. 31 exit.

Speaking after parliament rejected the government’s planned timetable for the legislation, Mr. Johnson said: “The EU must now make up their minds over how to answer parliament’s request for a delay.”

“I will speak to EU member states about their intentions. Until they have reached a decision we will pause this legislation. Let me be clear, our policy remains that we should not delay,” he said.

Mr. Johnson will hold conversations with other EU leaders to determine what their next steps are after parliament rejected his proposed timetable to pass Brexit legislation, his spokesman said.

Earlier, Mr. Johnson said he would end an attempt to win parliamentary approval for the legislation that would enable Britain to leave the European Union and instead press for an election if lawmakers rejected the timetable.

After the vote, Mr. Johnson said he would pause the process to determine the EU’s position on a Brexit delay after he was forced to ask for one by the parliament on Saturday.

The European Commission took note of the vote in British parliament rejecting Prime Minister Boris Johnson’s tight timetable for the approval of a divorce deal with the EU and said it would wait for London to tell it what’s next.

“The European Commission takes note of tonights result and expects the U.K. government to inform us about the next steps,” Commission spokeswoman Mina Andreeva said on Twitter.

“European Council President (Donald Tusk) is consulting leaders on the UKs request for an extension until 31 January 2020,” she said. A spokesman for Tusk declined comment.

Senior EU officials said the 27 countries that would remain in the EU after Britain leaves wold “certainly not” react immediately. “We stay calm,” one senior diplomat said.

Science took a beating in the political arena as U.S. President Donald Trump sowed confusion about Hurricane Dorian’s path and Democratic presidential candidates rang false alarms about the air we breathe and a looming point of no return on the climate. In a head-spinning week, Mr. Trump found himself contradicted by his government’s own meteorologists […]

Residents in several Bolivian cities are reporting food and gasoline shortages because of protests by supporters of former President Evo Morales, who resigned and fled to Mexico after a disputed election and nationwide unrest. Bolivian interim government said Monday that its efforts to resupply La Paz faced challenges because demonstrators cut off some transport routes. […]