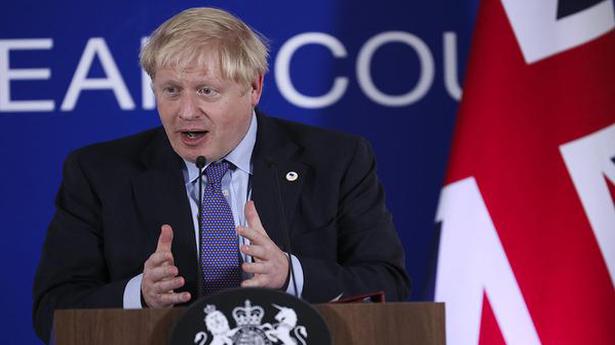 British Prime Minister Boris Johnson launched a charm offensive on Friday to sell his Brexit deal to sceptical MPs, with a looming vote in Parliament resting on a knife-edge.

The Conservative leader pulled off a major coup in agreeing to a new divorce deal with the EU on Thursday, paving the way for him to deliver his promise to leave the bloc on October 31.

But the agreement must still be approved by the House of Commons, which is meeting for the first time on a Saturday in 37 years to debate the text — and many MPs are strongly opposed.

Mr. Johnson told a Brussels press conference late on Thursday that he was “very confident” of getting the accord through — although analysts suggest the vote could be very tight.

Mr. Johnson has no majority among MPs, opposition parties have come out against the deal and even his parliamentary ally, Northern Ireland’s Democratic Unionist Party (DUP), says it cannot support the terms.

If the Commons rejects the deal, Mr. Johnson will be forced by law to ask the EU to delay Brexit, for what would be the third time. He has said he would rather “die in a ditch” than do so.

European Commission President Jean-Claude Juncker sought to focus MPs’ minds, saying Brussels can see no need to prolong the tortuous three-year Brexit process — although the decision to delay, if requested by London, would be for EU leaders. “There is no choice between Brexit or no Brexit: it’s a choice between deal or no deal,” Luxembourg’s Prime Minister Xavier Bettel said Friday.

‘This is our chance’

Mr. Johnson took office in July vowing to keep to the October 31 Brexit deadline, deal or no deal.

He pledged to renegotiate the most contentious elements of a divorce text agreed to by his predecessor Theresa May with Brussels last year, which was rejected by MPs three times.

The compromise deal that was finally struck on Thursday has a new arrangement for keeping open the border between British Northern Ireland and EU member Ireland. “It looks like we are very close to the final stretch,” EU Council President Donald Tusk said after the bloc’s leaders endorsed the text.

Mr. Johnson has assured his European counterparts that he can get the deal through the Commons, where he requires the support of 319 other MPs to guarantee backing.

“I’m very confident that when my colleagues in Parliament study this agreement, that they will want to vote for it on Saturday, and then in succeeding days,” he told reporters. “This is our chance in the U.K. as democrats to get Brexit done, and come out on October 31.”

However, the DUP has said it cannot support the plans, as efforts to avoid checks on the Irish land border would lead to new trade barriers between Northern Ireland and mainland Britain.

Pakistan’s ailing former prime minister Nawaz Sharif was shifted to his Jati Umra Raiwind residence here on Wednesday after his two-week stay at a hospital for treatment of multiple diseases. Sharif, 69, was admitted to the Services Hospital here on October 22 from Pakistan’s anti-graft body’s custody after his platelets dropped to a critically low […]