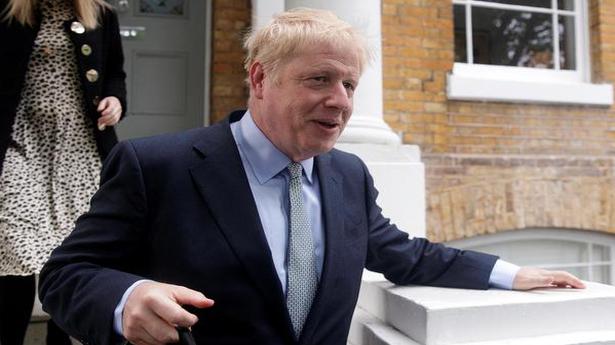 Boris Johnson took a commanding lead on Thursday in the contest to become Britain’s next prime minister, winning by far the largest share of support in the first-round voting by Conservative Party lawmakers.

Mr. Johnson, a former foreign secretary and leading Brexit campaigner, secured 114 of the 313 votes cast in the round, which reduced the field of candidates from 10 to seven. His successor as foreign secretary, Jeremy Hunt, trailed with 43 votes, followed by Environment Secretary Michael Gove with 37.

Mr. Johnson thanked supporters and tweeted, “I am delighted to win the first ballot, but we have a long way to go.”

The result exceeded the expectations of Mr.Johnson’s team and makes him almost certain to be among the final two candidates who will be put to a vote of 160,000 party members nationwide. The winner will become Conservative leader and British prime minister.

Three candidates were eliminated. Lawmakers Esther McVey, Mark Harper and Andrea Leadsom all failed to reach the threshold of 17 votes needed to get to the next round.

The contest is dominated by the issue of Britain’s stalled departure from the European Union, with all the contenders promising to succeed where Theresa May failed and lead the country out of the bloc.

Britain’s EU departure was originally due to take place on March 29, but has been delayed to Oct. 31 because of the political deadlock in London.

Mr.Johnson vowed on Wednesday that as Prime Minister he would “get Brexit done,” either by renegotiating May’s rejected Brexit deal or by leaving the EU on Oct. 31 without an agreement.

EU leaders are adamant that the agreement won’t be altered and economists warn that a no-deal departure would cause economic chaos for the U.K.

Veteran English comedian Eddie Large has passed away at the age of 78 after complications due to coronavirus. Large’s son, Ryan McGinnis, shared the news on Facebook, saying his father had been suffering with heart failure and contracted the virus in hospital. It is with great sadness that Mum and I need to announce that […]

Media mogul Oprah Winfrey has launched a new series “Oprah Talks COVID-19” for Apple TV Plus. The 66-year-old former TV host announced the show on social media and for its first episode, she sat down with actor Idris Elba via Facetime to talk about his coronavirus diagnosis. “Like millions of people all over the world, […]

Manmohan Singh to go to Kartarpur as ‘a common man’

Pakistan Foreign Minister Shah Mahmood Qureshi has said that former Indian Prime Minister Manmohan Singh would attend the Kartarpur Corridor inauguration ceremony on November 9 as a common man. Mr. Qureshi told reporters in his home town Multan on Saturday that Mr. Singh has accepted his invitation and would attend the scheduled opening as a […]