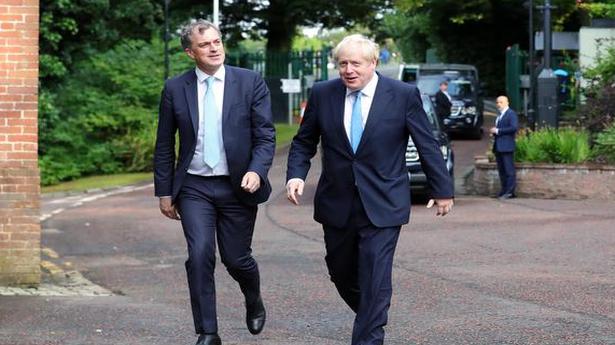 Britain’s Prime Minister Boris Johnson held talks with allies in Northern Ireland on Wednesday in a bid to solve the Irish border conundrum that has scuppered all efforts to secure an orderly withdrawal from the European Union.

Mr. Johnson held talks with the Democratic Unionist Party, the pro-Brexit party whose 10 lawmakers prop up his government. The party’s leader said she believed a compromise could be reached and another party member present said a time-limited backstop was discussed.

“There are ways to deal with this issue if there is a willingness on both sides,” Arlene Foster said.

While she agreed the Withdrawal Agreement and the backstop were effectively dead, she said a “sensible way forward” was possible if the Irish government agreed to engage. The backstop would force Britain to obey some EU rules if no other way could be found to keep the land border open between British-ruled Northern Ireland and EU member Ireland. Dublin says this is crucial to maintaining peace on the island.

Taiwan President Tsai Ing-wen has named as her running mate for 2020 elections a former premier who angered Beijing so badly last year with his support for the island’s formal independence that a major Chinese paper called for his arrest. Self-ruled and democratic Taiwan is claimed by China as a wayward province and is the […]

Pakistan, obsessed with India as a “perceived existential threat”, has created terrorist groups to be a tool against India, a former top American spymaster has said. Former CIA acting director Michael Morell, in a podcast discussion with Kurt Campbell and Rich Verma on Thursday, alleged that Pakistan is one of the most dangerous countries in […]

They’re angry at their elders, and they’re not taking it sitting down. Students worldwide are skipping classes on Friday to take to the streets to protest their governments’ failure to take sufficient action against global warming. The coordinated ‘school strikes,’ being held from the South Pacific to the edge of the Arctic Circle, were inspired […]