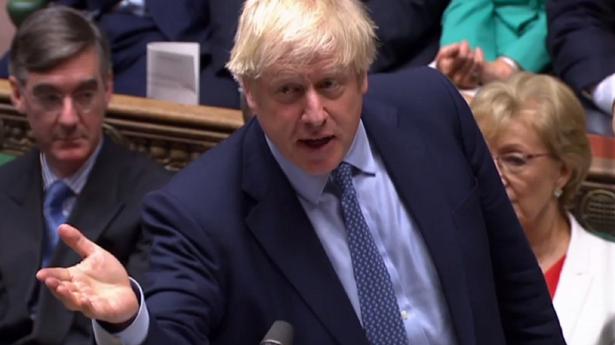 British Prime Minister Boris Johnson on Wednesday challenged Opposition MPs to call a vote of no confidence in his government, after the Supreme Court struck down his decision to suspend Parliament in the run-up to Brexit.

The ruling by Britain’s highest court on Tuesday that the suspension was unlawful was a stunning blow to Mr. Johnson’s authority just weeks before the country is due leave the European Union on October 31.

But the Conservative leader showed no contrition as he faced MPs in the House of Commons, which had hastily reconvened on Wednesday.

He condemned the verdict as “wrong” and, faced with calls to resign, challenged the main Opposition Labour Party and others to call an immediate confidence vote. “They have until the house rises today to table a motion of no confidence in the government, and we can have that vote tomorrow,” he said. “Will they have the courage to act or will they refuse to take responsibility and do nothing but dither and delay… what are they scared of?

However, Labour leader Jeremy Corbyn said that while he wanted Mr. Johnson to resign, he would not back an election until the PM’s threat of leaving the EU without a divorce deal was removed. In the week before Parliament was suspended earlier this month, MPs pushed through a law requiring the Premier to delay Brexit by three months if he cannot strike exit terms with Brussels in time. Addressing a rowdy and packed Commons chamber, Mr. Corbyn said: “If he wants an election, get an extension and let’s have an election. “No one can trust this Prime Minister. “For the good of this country, he should go.”

Mr. Johnson, who only took office in July, says he suspended Parliament for five weeks until October 14 to allow his new government to launch a fresh legislative programme. But critics accused him of trying to silence MPs, the majority of whom object to his threat to leave the EU without a deal if one cannot be struck with Brussels. On Tuesday, 11 Supreme Court judges unanimously ruled that Mr. Johnson’s decision to advice Queen Elizabeth II to suspend Parliament was unlawful.

It said the effect had been to frustrate Parliament, and declared the suspension void.

Mr. Johnson, who flew back early from the UN General Assembly in New York to address the newly resumed Parliament, accused MPs of trying to undermining the 2016 Brexit vote. “We decided to call that referendum, we promised time and again to respect it. I think the people of this country have had enough of it,” he said. “This Parliament must either stand aside and let this government get Brexit done or bring a vote of confidence and finally face the day of reckoning with the voters.”

However, a snap election requires support of two-thirds of MPs, and Mr. Johnson does not have even a simple majority in the 650-seat House of Commons.

Mr. Johnson said Parliament was “gridlocked, paralysed and refusing to deliver on the priorities of the people”.

The Supreme Court ruling is a hammer blow to Mr. Johnson’s authority, and comes after a series of defeats in Parliament.

MPs rushed through a law this month demanding the Prime Minister delay Brexit if he cannot get a deal by next month — although Ministers have suggested they will try to get around it.

Mr. Johnson continues to insist he will leave the EU on October 31 — for which he needs to get a Brexit deal. He is seeking to amend the terms struck by his predecessor Theresa May, which have been rejected by MPs three times. However, EU leaders are not optimistic.

In another headache for Mr. Johnson, one of his Ministers was called to answer questions in the Commons over the Prime Minister’s relationship with a U.S. technology entrepreneur.

The Sunday Times newspaper reported that Jennifer Arcuri, a former model, was given privileged access when Mr. Johnson was London Mayor and earlier this year received substantial public funds. “We have no reason to think there is anything untoward in this particular matter,” Digital Minister Matt Warman said.

NDS says it wants to stop the import of the popular device. The Taliban have deployed small drones to drop bombs on government forces in some recent attacks, Afghanistan’s spy chief said on Monday, illustrating a new fighting method used by the insurgents. Ahmad Zia Shiraj, who heads the National Directorate of Security (NDS), said […]

China detains over a dozen activists in year-end crackdown

Over a dozen Chinese lawyers and activists were detained or went missing in the final days of 2019 in a crackdown on participants of a private democracy gathering, rights groups said on Thursday. The Chinese government has severely reduced the space for civil liberties since President Xi Jinping took power in 2012, rounding up rights […]

British Prime Minister Boris Johnson phoned the 23-year-old Manchester United striker to inform him of the government’s decision to spend £170 million in extra funding to support needy families over the coming year. The British government has made another abrupt about-face and now says it will provide free meals to disadvantaged children in England over […]