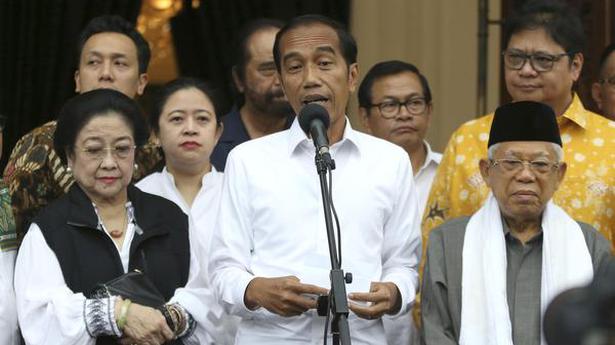 Indonesia’s Joko Widodo said on Thursday that his re-election as head of the world’s third-biggest democracy was all but assured, calling for calm as his firebrand ex-General rival insisted he had in fact won the nation’s top job.

Mr. Widodo, 57, said he had received phone calls from world leaders to congratulate him on his country’s biggest-ever election, but added he would await the final results before formally declaring victory.

He cited a series of so-called “quick counts” by pollsters, which are based on samples, that showed him as much as 11 percentage points ahead of Mr. Subianto.

Quick counts have been reliable indicators in past elections. But “we still have to wait for the numbers from the KPU (General Elections Commission)”, Mr. Widodo told reporters. “Let’s continue to work and maintain our unity and harmony as a nation,” he added.

However, Mr. Subianto insisted that he and running mate Sandiaga Uno, a wealthy financier, had prevailed, citing voter fraud but without supplying concrete evidence.

“Sandiaga Uno and I are declaring victory as the President and Vice-President,” he told cheering supporters in Jakarta, ending his speech with shouts of Allahu Akbar (God is Greatest) and Merdeka (freedom).

Some supporters of Mr. Subianto called for a march near Jakarta’s biggest mosque after prayers on Friday.

The competing claims came as authorities warned against unrest over Wednesday’s “smooth and safe” polls, and warned of arrests. “If there are any illegal or unconstitutional actions that threaten public stability and security, (authorities) will take firm action,” National Police Chief Tito Karnavian said Thursday. “We won’t tolerate it. “I urge everyone against mass demonstrations, whether it’s to celebrate or to express dissatisfaction” at the results, Mr. Karnavian added.

Prime Minister Boris Johnson granted Huawei a limited role in Britain’s 5G mobile network on January 28, resisting U.S. pressure to exclude the Chinese company from next generation communications over fears Beijing could use them to spy. Britain had to weigh its “special relationship” with the U.S. against Chinese trade and investment ties which it […]

Britain, France and Germany ratcheted up pressure on Iran on Tuesday to cease its violations of a landmark nuclear deal, stressing that they want to resolve differences through talks while starting the clock on a process that could result in a so-called “snapback” of United Nations sanctions. The three countries, which signed the international agreement […]