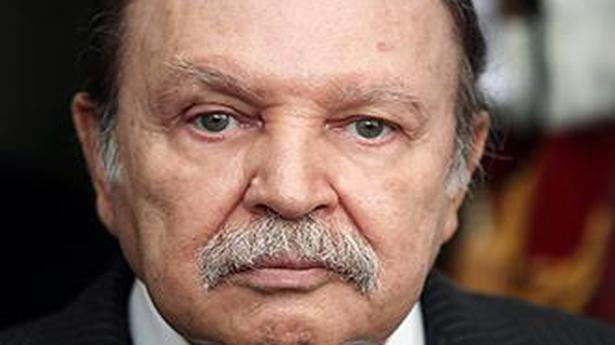 President Abdelaziz Bouteflika is expected to return to Algeria on Sunday after two weeks in a Swiss hospital as he faces mass protests that pose the biggest threat to his 20-year rule.

In the clearest indication yet that the generals sympathise with tens of thousands of Algerians who want Mr. Bouteflika to step down, the Chief of Staff said the military and the people had a united vision of the future, state TV reported. Lieutenant General Gaed Salah did not mention the protests.

A source familiar with the matter said Mr. Bouteflika would return on Sunday.

An Algerian government plane landed at Geneva’s Cointrin airport earlier on Sunday. A Reuters witness saw the Gulfstream executive jet, the one which had taken Mr. Bouteflika to Geneva on February 24, touch down at the airport amid a heavy police presence. Swiss newspaper La Tribune de Geneve reported that the plane was due to leave Geneva at 3 p.m. (1400 GMT). It did not identify its source.

Algerians of all social classes have protested over the past three weeks against Mr. Bouteflika’s decision to stand in April’s election.

On Sunday, thousands took to the streets of the capital carrying the Algerian flag and chanting: “Bouteflika, there will be no fifth term”. Many shops in Algiers were closed and residents say train services had been suspended. Young Algerians are desperate for jobs and angry at unemployment, corruption and an elderly elite.

The U.S. will continue to stand with the freedom-loving people of Hong Kong and respond to Beijing’s attacks on freedoms of speech, says the Secretary of State Source: thehindu.com Related