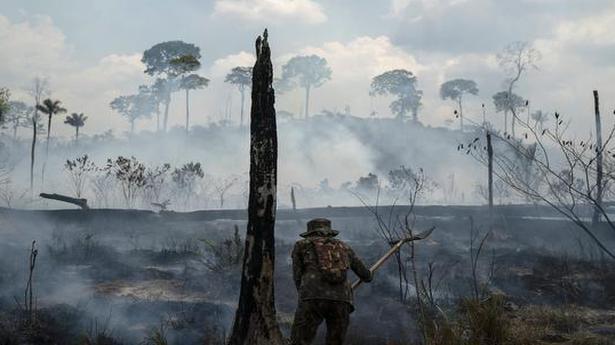 Brazil’s Defence Minister said on September 24 that 63 people were arrested and issued fines amounting to $8.7 million after the military was sent to fight raging fires in the Amazon rainforest.

The announcement came as Brazil President Jair Bolsonaro arrived in New York to attend the UN General Assembly, where he said he would “reaffirm the sovereignty” of Brazil after the surge in blazes sparked international outcry.

Amid the criticism, Mr. Bolsonaro in August authorised the deployment of the military to the Amazon in an operation that was extended to October 24.

Defence Minister Fernando Azevedo e Silva told a press conference that the military made 571 land and 250 air raids to combat the fires in the rainforest, a major absorber of carbon dioxide that’s home to one of Earth’s most concentrated and extensive collections of biological diversity.

Based on research from the country’s National Institute for Space Research (INPE), Brazil in August recorded 30,901 fires in the Amazon region, almost triple the 10,421 recorded in the same month in 2018, Mr. Azevedo said.

The Minister emphasized that the number of fires recorded so far this month in the rainforest was 17,095, well below the historical average for September of 33,426, while acknowledging that concerns remained over fires burning in certain areas, specifically the centre of the forest.

“What was coming, mainly from the outside, was that the Amazon was on fire. We showed the reality, and I think it is far from a burning Amazon,” the Minister said, speaking alongside a technical team that participated in the operation.

Coronavirus | Deaths in Africa above 1,000, including Nigerian chief of staff

Africa now has more than 1,000 deaths from COVID-19, the Africa Centers for Disease Control and Prevention said Saturday, while Nigeria said the president’s chief of staff had died. Also read | Interactive graphic tracking global spread of coronavirus A total of 52 of the continent’s 54 countries have reported the coronavirus, with the overall […]

North Korea fired two “unidentified projectiles” into the sea on Friday, the South’s Joint Chiefs of Staff said — the latest in a series of such launches by Pyongyang. The South Korean military said the projectiles were fired from near the city of Tongchon of Kangwon Province into the East Sea, also known as the […]

Amid talks with U.S., Taliban declares start of spring offensive

The Taliban announced on Friday the start of their spring offensive despite talking peace with the United States and ahead of a significant gathering of Afghans meant to discuss resolutions to the protracted war and an eventual withdrawal of American troops from the country. The insurgents released a lengthy missive in five languages, including English, […]