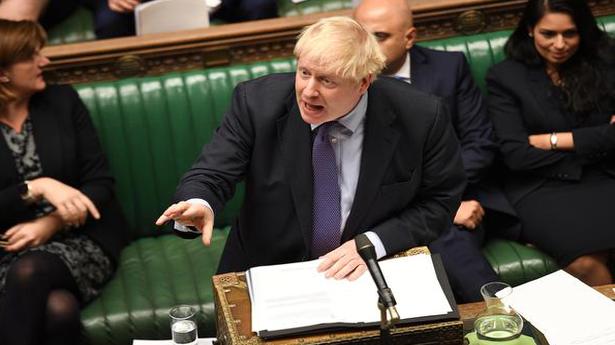 Ahead of the vote, Mr. Johnson had warned parliament that if it defeated him on the timetable and forced a delay until January then he would abandon his attempt to ratify the deal and push for an election instead under the slogan of “Get Brexit Done”.

Mr. Johnson was on Saturday forced by opponents into the humiliation of asking the EU for a delay beyond Oct. 31 that he had vowed he would never seek. The European Council president Donald Tusk said he is taking the request seriously.

Lawmakers voted 322 to 308 against the so-called Programme Motion which set out a three-day schedule to rush his deal through the House of Commons.

Earlier, lawmakers voted 329 to 299 in favour of the second reading of his 115-page Withdrawal Agreement Bill, a significant boost for Mr. Johnson just five days after he struck a last-minute deal with the EU.

Indian diamond businessman Nirav Modi, accused in the ₹13,000 crore Punjab National Bank fraud case, was denied bail here on Wednesday, despite offering the court assurances including £500,000 as security. The hearing before district judge Marie Mallon took place a day after Modi was arrested at a bank branch in London by the Metropolitan Police. […]

The World Health Organization (WHO) on Tuesday warned of a global shortage and price gouging for protective equipment to fight the fast-spreading coronavirus and asked companies and governments to increase production by 40% as the death toll from the respiratory illness mounted. Meanwhile, the U.S. Federal Reserve cut interest rates on Tuesday in an emergency […]

India and Pakistan should suspend hostilities as the world has to focus on the devastating challenge of the COVID-19 pandemic, a top U.N. diplomat has said. The comment from Jose Singer, Ambassador of the Dominican Republic and current President of the U.N. Security Council, came in the backdrop of the heightened tension at the Line […]