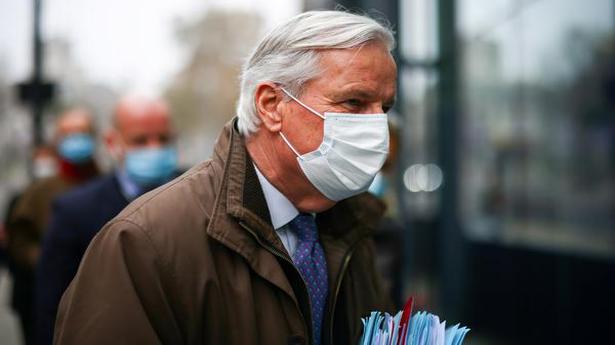 It is the first time European Union chief negotiator Michel Barnier and his British counterpart David Frost have met face-to-face since Mr. Barnier went into self-isolation after a member of his team caught coronavirus.

It is the first time they have met face-to-face since Mr. Barnier went into self-isolation after a member of his team caught coronavirus.

A failure to reach an agreement would see Britain and the EU trading on World Trade Organization terms, with tariffs immediately imposed on goods travelling to and from the continent.

Britain has been largely trading on the same terms with the EU since it officially left the bloc in January as part of a transition agreement that expires at the end of the year.

As it stands, it will leaves Europe’s trade and customs area in five weeks with talks on a follow-on agreement stalled over fishing rights and fair trade rules.

Both parties warned on Friday that success was not guaranteed, with Barnier tweeting that the “same significant divergences persist”.

“We are not far from the take it or leave it moment,” he later told ambassadors from member states, according to a European source familiar with the closed-door meeting.

Prime Minister Boris Johnson’s lead negotiator Frost said that people were “asking me why we are still talking,” he tweeted.

“My answer is that it’s my job to do my utmost to see if the conditions for a deal exist. It is late but a deal is still possible, and I will continue to talk until it’s clear that it isn’t.”

A no-deal scenario is widely expected to cause economic chaos, with customs checks required at borders.

Concern is particularly acute on the border between EU member Ireland and the British province of Northern Ireland, where the sudden imposition of a hard border threatens the delicate peace secured by 1999’s Good Friday Agreement.

Mr. Johnson spoke with Irish Prime Minister Micheal Martin late Friday and “underlined his commitment to reaching a deal that respects the sovereignty of the UK”.

But he also “reaffirmed the need to prioritise the Good Friday Agreement and avoid a hard border on the island of Ireland,” according to a summary of the call released by London.

Mr. Johnson earlier told reporters the “likelihood of a deal is very much determined by our friends and partners in the EU”, adding there were “substantial and important differences to be bridged.”

A key sticking point is the EU’s demand for a post-Brexit “level playing field”, with punishing trade penalties if either side diverges from agreed standards or state aid regulations, but Britain does not want to be bound by rules made in Brussels.

Britain’s fishing waters are also a hot topic, with sources on Friday saying that Mr. Barnier told envoys that London was asking that European access to them be cut by 80%, while the EU was willing to accept 15 to 18%.

The talks have already pushed on much longer than expected and time is running out for ratification of any deal by the European Parliament by the end of the year.

Members of the European Parliament have expressed frustration with the delays and may have to ratify a deal between Christmas and the New Year.

In Brussels, one source close to the talks said she would “eat my hat” if there was a deal by Monday, echoing a chorus of complaints that Mr. Johnson was playing the clock.

China’s GDP grew by 6.1 per cent last year, the lowest in 29 years, the government said on Friday, as sluggish domestic demand and the bruising 18-month trade war with the US seriously impacted the world’s second-largest economy. The new GDP data released by the National Bureau of Statistics (NBS) comes a day after China […]