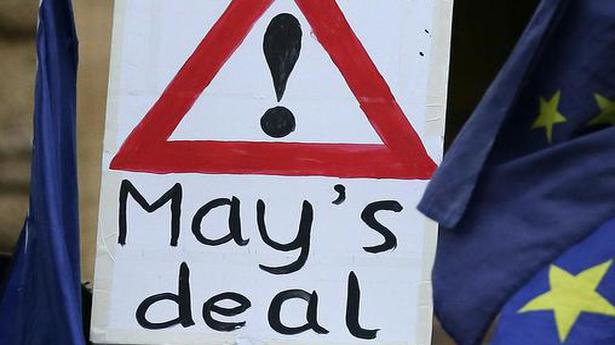 British Prime Minister Theresa May has just had one of the most tumultuous weeks in her political career. With just two weeks to go before Britain’s scheduled departure from the European Union, MPs voted against her Brexit agreement, for a second time, on Tuesday. The next day, they voted to reject a no-deal exit.

On Thursday, lawmakers voted against holding a second referendum on Brexit, and for seeking an extension for the departure. This means a majority of MPs want an orderly divorce with the EU, but not on the withdrawal agreement Ms. May has reached with European leaders.

It sets the terms on which a member country will leave the EU. According to the agreement reached between the U.K. and the EU, the transition period (the time to implement it) begins on March 29 and lasts till December 31, 2020. The U.K. will lose membership in the EU institutions as soon as the transition period kicks in, but will need to abide by EU rules till the transition is over. According to Ms. May’s deal, the U.K. will have to pay about £39 billion to the EU in instalments to settle all its financial obligations. It also states that U.K. citizens in the EU and EU citizens in the U.K. will retain their residency and social security rights. On the Northern Ireland border, the agreement has proposed a backstop of a single customs territory between the EU and the U.K., in case no trade deal is reached at the end of the transition period.

Open border was a major part of the peace agreement. But if the U.K. leaves the EU without a proper agreement, there will be a hard border between Northern Ireland and the Republic of Ireland. The backstop intends to avoid such a scenario. According to Ms. May’s deal, the British government would seek to reach a trade agreement with the EU that would avoid a hard border between the Irelands. But if no trade agreement is reached between the U.K. and the EU by the end of the transition period, the backstop will come into force — a single customs territory between the EU and the U.K. In that case, Northern Ireland will be bound by many EU rules, and the U.K. cannot leave the backstop without the EU’s approval.

Why did MPs oppose the deal?

The central issue of the opposition is the backstop. Conservative MPs who voted twice against their Prime Minister’s deal say the backstop would permanently entrap the U.K. within the customs union and the single market. Within the customs union, individual members do not have the powers to impose tariffs on goods they import. Instead, the customs duty is fixed by the EU. So if the U.K. fails to reach a trade agreement with the EU during the transition period and the backstop comes into effect, the U.K. will effectively continue within the customs union. It will have to abide by the EU trade rules without having a say in EU decision-making as it would not be a member. Hard-Brexiteers call it a trap. And they oppose the present deal, while Ms. May says backstop is only an insurance and the current deal is the best the U.K. could get from the EU. The Labour Party, the main Opposition, wants a permanent customs union with the EU, but with rights to decide the U.K.’s trade policy. “Labour would seek to negotiate a new comprehensive UK-EU customs union to ensure that there are no tariffs with Europe, and help avoid any need for a hard border in Northern Ireland,” the party said. Labour leader Jeremy Corbyn has called for Ms. May’s resignation and fresh election and promised to renegotiate a new deal with the EU.

What is the way out?

A possible scenario is the government seeking an extension to Brexit, and the EU is likely to take a decision on March 21. If the EU rejects the request, Britain will crash out on March 29. In the event of an extension, the question is how long it will be. If it’s beyond May 23, the day of elections to the European Parliament, the U.K. will have to take part in it. If the extra time is only a few weeks, the challenge is to come up with another deal acceptable to both British lawmakers and the EU.

Pakistan on Friday extended ban on domestic and international flight operations up to April 21 as the country stepped up efforts to contain the spread of the novel coronavirus (COVID-19), which has infected more than 4,500 people in the country, authorities said. The total number of cases in Pakistan has sharply increased to 4,601, with […]

Pakistan has refused a request by India to allow President Ram Nath Kovind to use its airspace for his flight to Iceland, Foreign Minister Shah Mehmood Qureshi said on Saturday. Kovind will embark on a visit to Iceland, Switzerland and Slovenia from Monday during which he is expected to brief the top leadership in those […]

A fire at Toronto Pearson International Airport has caused officials to cancel all U.S.-bound flights from Terminal 1. The blaze broke out in the terminal on Sunday evening and the area was evacuated. The airport announced in a tweet that all flights to the U.S. scheduled to depart from Terminal 1 had been cancelled. The […]